What Your Father Told You

That certainly is a big question to ask for someone who has eyes and ears. Look around you. Athas hates us. We’ve bled her dry and are scratching at her bones. No wonder you got assigned outside the walls. You are going to have to be a little more observant than that if you are going to make it anywhere at this job. Next Question! 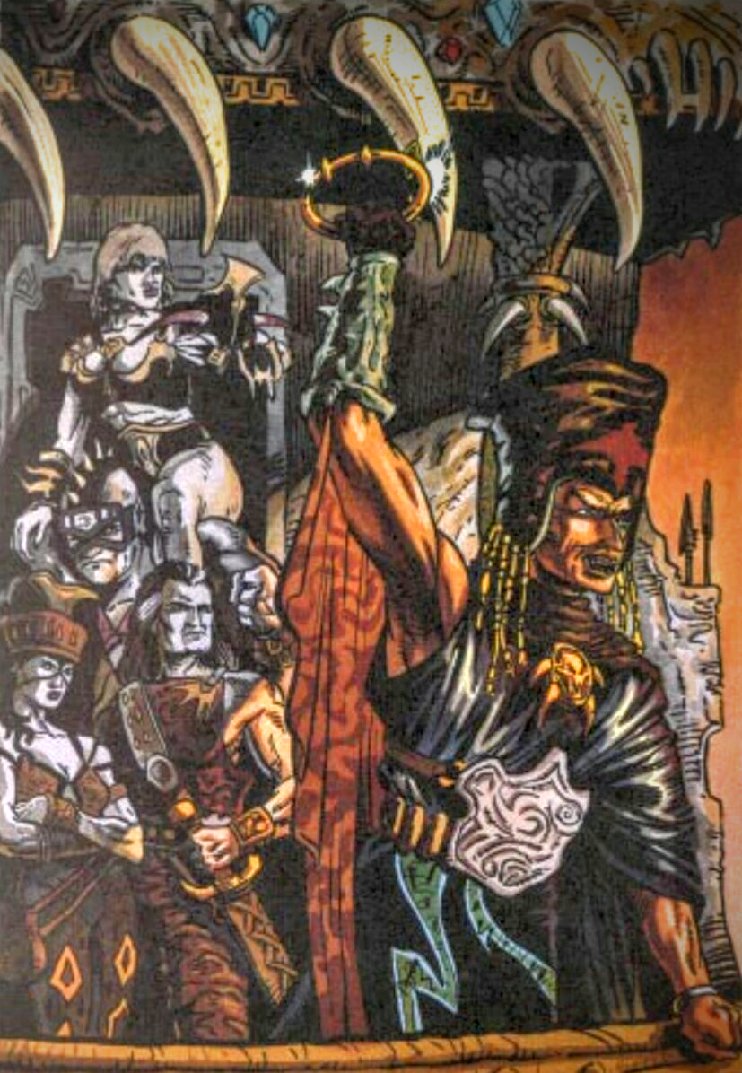 There are so many different looking people in the world, Stinky Tareks, tall Elves, short Dwarves (don’t call them that to their face!), ugly Pterrans, that the mind boggles to keep track of them all. My years of experience have narrowed all these crazy looking people down into two sorts.

Don’t interrupt ! There are two kinds of people, Thinkers and Chumps. No matter what a person looks like or where he comes from, these two are all there are.

Being a thinker is what I aspire to be. Well-known, a step ahead, horribly, horribly wealthy, all of it. There’s not too many of these folks on this blasted little rock are there? Hamanu, Nibeney, Tithian the First, Lalale-puy ( or is it Lalala-pie ? ) these are the greatest of them all, these people have clawed their way to the top of the dung-heap and have emblazoned themselves into history, now that we can write it down. Smaller potatoes guys are the Merchant Lords, these guys are great ! Secure a commodity in demand and monopolize the market ! Brilliant ! These guys have a power even the Sorcerer-Kings can’t match, things. These guys have so much junk that all the cities are completely dependent on them for survival. These guys are not that tough to get around though, just know your Merchant’s Code and remember you are the one with the money. The most important thing to remember about Thinkers is that they always have a plan, and a back-up plan. And stay on your toes, you never know when one might turn up.

The rest are the Chumps. Every ex-slave, every desert nomad, every Halfling and Half-Giant, Nobles, even most of the Templars are Chumps. These folk just go from day to day living out their lives, scratching for their next meal or next fix. Chumps don’t think and their misery proves it. Just find out what they eat or what their addicted to and you’ll wade through the masses unsullied by their stupidity. Next Question !

What are the most valuable things in life?

Getting others to do what you tell them to, and making yourself comfortable.

The art of getting other to heed your will is the oldest magic. Property, psionics, sorcery and money were just tools invented along the way to make it easier for Thinkers to get Chumps to make the Thinkers lives comfortable. Next Question!

The biggest Thinkers of all. Sorcerer-Kings can be at eight places at once and can pull the sun out of the sky. Kalak was never a Sorcerer-King though. Kalak was probably the most powerful Chump to have ever existed and Hamanu tried to grab at the fallen dagger, but Tithian was quicker and he got Agis and Rikus to drive the Lion-King away. That’s why Tithian is the hero of all Thinkers, he out-thought a Champion. Next Question!

Simply put, we lick the Sorcerer-Kings boots in hopes that he will drop some power on accident. But now that the old Sorcerer-Kings are dying like Iron-miners, we have the ability to forge our own system which will make our lives comfortable. Who knows what we will become ? Next Question !

You live in one, what else do you need to know ? They stink and the mass stupidity is overwhelming. Nothing like wall to wall chumps eager to get cheated and robbed. Next Question !

If they don’t live in the Cities or are Merchant Lords, they don’t matter. They have no money, and no power. If they irritate you, kill them.

The best weapon. If you suspect someone to be a magician, report to me.

What is the Unseen Way?

The second best weapon, if you can learn how to use it. This isn’t really my playing field, if you want to know more ask my body guard, Keegan. (He’s not too bright, but he has a light if you know what I mean.)

Who are the Priests?

Weird magicians that live in the wilderness. They say that their magic spells are gifts from the spirits, but magic is magic. They get really mad at other wizards because they say that they defile the planet, as if it isn’t already screwed up enough that they would notice.

What do the Priests worship?

They say that they worship the rocks and campfires and other such nonsense. I don’t care what Chumps from the wilderness believe, I just care about what they want from me.

My old teacher said once that we all evolved from the Halflings. I personally think that he ate to many psi-flowers on his trip to the mountains. Next Question !

We are here for no reason at all. We might as well make ourselves comfortable while we are here. Next Question !

What happens after we die?

We turn to dust. Better not concern yourself with philosophy and worry about your job. You gotta keep on your toes here. I’m bored with these questions.

Now you are going to have to man the wall. You get one half-hour break at noon and your shift ends at nightfall….