The first of a new series of articles providing encounters ideas DMs can use to add flavor to their campaigns.

Faces of the Dead Lands is far more than just a collection of NPCs and their stats. Within these pages you will find the first-hand accounts of this devastated land and the lush lands that came before it, as experienced through the eyes of the ancient undead who were there. The stories within each NPC description not only paint clear pictures of the motivations and experiences of these characters, but they also build upon existing canon for both the Dead Lands and the other ancient stories from the rest of Athas, granting a much clearer picture of what it was really like to experience the early days of the Cleansing Wars and the terrible Obsidian Tide.

This is where you, our dear Athas.org community, come in.

We will be releasing the adventures for playtesting as they are ready, announcing them here with open registration to download the beta releases to try on your adventuring parties. In exchange for your reviews and feedback, your ideas will be rolled into the adventures and you and your players will appear in the credits for the finished book!

In which the Templars discuss the magic which protected Tektuktitlay during his battles with Rajaat and in the Cerulean Storm.

Our team of talented writers in the Pristine Tower Development Group have begun a new story series, this one following the journeys of Zong-Tossu, a master lifeshaper of the Rhul-thaun.

Join our traveller he visits the Somber Woods. A reimagining of the original series (posted on the Dark Sun Facebook group) with rewritten entries and more locations, as he visits rarely visited areas on the Revised 2nd edition map.

Find out what secrets the bandit village of Pillage the Troll Grave Chasm hold.

Join the Wanderer as they discover a buried city in the north.

Episode 4 - The Buried City in the Barrier Wastes 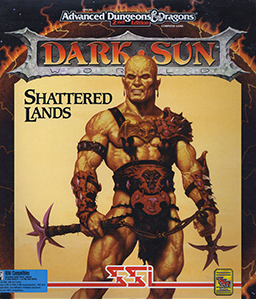 Now that you can get Shattered Lands on Steam and GoG we thought it’d be a good time to repost this walk through, which was originally posted on the Unofficial Dark Sun Pages.