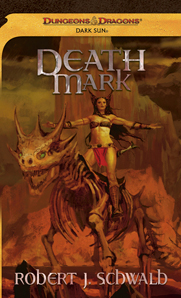 The new Dark Sun novel, Death Mark by Robert J. Schwalb, is being released as a mass market paperback and a kindle ebook on December 6th, 2011 (ISBN: 978-0-7869-5840-5). This book is marketed and advertised as an Abyssal Plague novel, but for those of you who don’t care for the Abyssal Plague idea you'll be glad to find out that there's no mention of the Abyssal Plague in the book. What is in this first time novel writer and longtime game designer’s novel? That’s easy, Dark Sun and lots of it!

It’s easy to tell that Schwalb not only knows the setting (he is one of the 4th edition authors), but that he’s a fan. You won’t find mention of Goliaths or thri-kreen walking on six legs; instead you’ll hear about half-giants and the dwarven focus. Schwalb’s story focuses on the machinations of the Athasian merchant dynasties, a topic central to the Dark Sun setting that has been left all but unexplored in current or past novels.

The backdrop of these merchant wars is the budding war between the city-states of Tyr and Urik, but this is no Crimson Legion (Troy Denning’s second Dark Sun novel) part deux. Instead much of the action takes place in and around Tyr, focusing on events leading up to the war. We see how these events affect the world through the eyes of Schwalb’s characters, who are Athasian through and through. We see Loren a Tyrian, ex-gladiator recently freed from slavery in Nibenay only to be caught up in the backstabbing dealings of the merchant houses. We see Melech, street thief of Tyr struggling to survive and Korvak, Templar of Tyr, struggling to repair his reputation.  Then we have the players from the merchant houses themselves, cold Thaxos Vordon of Tyr and House Vordon, thoughtful Alaeda Stel of Urik and House Stel, and of course the mysterious Temmnya Shom of Nibenay and House Shom, all struggling to come out on top. Besides the main cast of characters, the supporting characters in Death Mark all bring some Athasian flavor with them; from Pakka and her dwarven focus to the halfling Watari and his choice of Athasian meals.

I really can’t explain how much of a pleasure it was to read this Dark Sun novel. Not only was the feel of the setting evident in every passage, but there was consistency with the other Dark Sun books and setting material that has been lacking in the past. That’s not to say that it was perfect.

I’m an old Dark Sun grognard and I noticed some details that were slightly off. First was the use of copper coins, I think this might just be a personal preference and throwback to the original setting where there were no copper coins and reading the Dark Sun campaign setting for 4th Edition Dungeons & Dragons it does mention Copper coinage, so not a big deal. Secondly, the use of an erdlu as a war mount. In all previous setting materials erdlu were domesticated herd animals used for food and goods, not fighting. Crodlu is the common riding animal and there are heavy or war crodlu in previous versions of the setting. I told you I was a Dark Sun grognard, so while not story breaking or anything, there it is.

Lastly the only other issue I had with the book was the end. This critique is not a setting issue, but one of storytelling. The end seemed a bit rushed and some of the details in the battle were a bit confusing. Why did these things show up and what was the purpose of this other thing? I can’t really explain without spoiling it (perhaps Schwalb himself will explain in an upcoming interview) and it didn’t ruin the book, it just left some unanswered questions. Perhaps those questions will be answered in another book. We can only hope!

All in all, this is the best of the new Dark Sun novels out and possibly one of the best of all, but nostalgia and the passage of time make it hard to compare. Suffice to say, if you’re a Dark Sun fan, buy this book! Even if you’re just a little interested in Dark Sun or Robert Schwalb’s writings, buy this book, you might just get swept away and find yourself lost in the deserts of Athas.

Edited: actually a mass market paperback and not an Abyssal plague novel per WotC.