Among the multitude of undead on the face of Athas there seem to be few thri-kreen that have made the transition into undeath. Since thri-kreen are an elder race by most sages reckoning, it stands to reason that there should be more undead of their kind wandering the wastes. It is this contradiction that lead me on my search for unliving kreen.

My search began with a small pack of kreen lead by a Hozik (or “leader-priest” in the kreen language) who was knowledgeable in the ways of the undead. This priest had a word for the undead of his race, hak’trin, or “lost near people”. While there were a few stories he could relate to me, he admitted to have never met any.

The stories he told were of  of kreen being animated by necromancers in hopes of having loyal soldiers. While most humanoids become docile and lack wits as zombies, it appears that when thri-kreen are turned into unthinking undead they become uncontrollable ravenous hunters of all things living, even their supposed masters. Apparently, even the most powerful necromants have trouble controlling these Hak’trin, and so few who study the art of necromancy raise kreen as servants.

The Hozik pointed me in the direction of the Dead Land, to a pack of kreen called the Hak’dre’kalak who are known to hunt down the insectoid and kreen dead near that region. He assured me that this pack would have more knowledge on the subject and wished me good hunting.

At this point, I had not traveled to the Dead Land yet and still had little inclination to pursue that bleak region. However, I was interested in finding out more about the Hak’trin, so I headed south in search of the Hak’dre’kalak pack.

The journey south took me many weeks. I traveled through Celik and had dealings with the House of Maraneth where I got more information about the Hak’dre’kalak. The tales I was told helped confirm their presence in the region. A tarek slaver told me that the pack hadn’t been seen in some time and many claimed that it fell prey to something from the Dead Land. Even with this possibility, I continued my search south.

Just as I began to question my decision to travel so far south with so little in the way of supplies, I came upon signs of a thri-kreen pack. Strangely the first sign was thri-kreen equipment strewn over great distances: a harness, and kreen weapons made of dasl (the crystal like substance the kreen make from sand) still in serviceable condition. There was dried thri-kreen ichor on the ground, quite a bit of it, and several sets of thri-kreen tracks leading off. It was clear there was a battle here but I could not tell what they fought, as only thri-kreen prints were in evidence, but it could have been some flying creature.

Against my companions’ better judgment I decided to follow the tracks through the dunes. Sometime later. we could hear the furious clicks and pops of the thri-kreen language. As we topped a ridge we could see a small camp in the minimalistic thri-kreen style

In the center of the camp, a kreen with a faded yellow carapace studied a book with others spread before him on a small rug in the sand. Milling about him were about a dozen other kreen, their chitin cracked, some had antennae broken, and showing other signs of injury. The injured kreen were not filling their cracked chiting with the crystal dasl that they make or otherwise tending their wounds, they were wandering around the camp in a stupor. I smelled the stench of a dead kank and looked around for a carcass. Tied up on the outskirts of the camp was a kank that looked to be in similarly poor health as the kreen, but was indeed moving around. It had a riding harness on, which was odd. I’ve never seen a thri-kreen ride a kank, at most the mantis people used kanks as pack animals.

Occasionally one of the wandering thri-kreen would attempt to lunge at the kreen in the center as if to attack him, but the faded green kreen continued to study his book while the attacker jerked to a stop three feet away as if held back by an invisible force. I soon noticed that within the sand around the faded green kreen was a traced circle, with small obsidian orbs placed around it. A thri-kreen wizard then; rare indeed. As I studied him more closely I noticed he, like the others, had breaks in his chitin and other injuries about his carapace, which was decorated with many precious stones and slivers of obsidian.

It was after I made this realization that one of my companions caused a rock to cascade down the ridge we were on. The kreen wizard looked up, gave a command, and a few of the kreen began bounding toward us with awkward leaps. I stood transfixed as I realized we were seeing the hak’trin, undead kreen, that were from the tales of the Hozik. These creatures made savage noises, the likes of which I’ve never heard from a thri-kreen. I would have stood there, transfixed on these horrific beings, had one of my companions not pulled me down the other side of the ridge.

We were quickly overtaken, and the hak’trin waded into battle more savagely than kreen from from elsewhere in the Tableland. They used their four claws and mandibles viciously rending anything they could grab. Luckily my companions were stalwart adventurers and, after a pitched battle, we overcame the hak’trin’s single minded, uncoordinated attack. Based on of the descriptions we heard in Celik and examining the bodies, these kreen appeared to be of the Hak’dre’kalak.

After the battle I returned to the ridge to find the kreen wizard and putrid smelling kank gone from the area. One of the scouts told me their tracks went further south, but I did not want to push the patience of the Winds any further and chose not to follow them. Searching the camp we found a piece of papyrus that had scribbling’s in a script I knew was ancient, but not in the party could decipher it.

With a little first-hand knowledge of the hak’trin and of the fate of the Hak’dre’kalak pack we headed back to Celik with more questions. Who was this seemingly undead thri-kreen wizard? How was he able to control the hak’trin, which are said to be uncontrollable? More investigation would be needed. 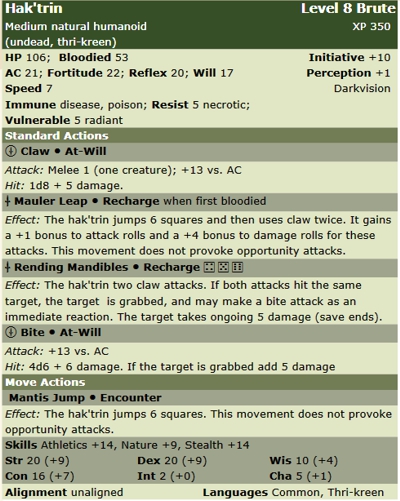 When a small part of the pack encountered Cho’Dre’Ka, they were disgusted by the kreen he raised as undead and desired to send him to Kano (kreen hell), where he belonged. The wizard kreen was powerful however, and the ensuing battle caused the defeat of most of the pack. Those of the pack that Cho’Dre’Ka killed were raised as hak’trin by the kreen necromancer. A few of the living pack escaped and have called to other kreen packs in the area to aid them in the quest of destroying the abominations that the fallen Hak’dre’Kalak have become.

Lead by Dre’dra (death sleeper ), a thri-kreen druid, the Hak’dre’kalak has hunted the wastes near the Dead Land for several thri-kreen generations. It is the pack’s calling to find and slay insectoid undead (see Terrors of the Dead Lands) that find their way up the cliffs and out of the obsidian plain of the southern Dead Lands. The thri-kreen of the Hak’dre’kalak are possibly the most knowledgeable living beings on the subject of the Dead Land. While pack has never entered the “Click-click lands”, they know too well the creatures that inhabit it. 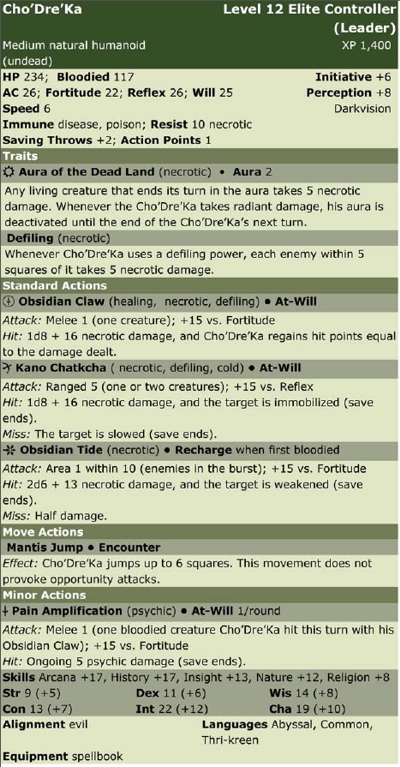 Inside the obsidian plain of the Dead Land a rare thri-kreen wizard named Cho’Dre’Ka sought teachers in the way of necromancy but fell to the predations of those he sought. He was raised by the necromantic powers of the region into undeath. He has since continued his search for necromantic knowledge beyond death. Unlike the sentient dead of the Dead Land, Cho’Dre’Ka recognizes the use of the living beyond the high cliff walls.

You can download the Monster Builder files for Hak’Trin and Cho’Dre’Ka.