Heroes of the Elemental Chaos as a Dark Sun Supplement 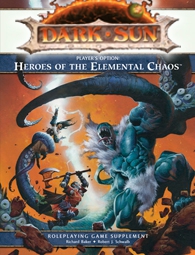 Despite that connection, the 4e Dark Sun Campaign Setting has always been missing something. You may recall Rodney Thompsons comment in the Design & Development article Psionics, Magic, and Metal:

The class structure of 4th Edition made it a bit easier to lose [the divine] power source, because leaders from other power sources could provide adequate healing and fill the other roles just as well. Cutting out the divine power source helped us create an Athas that seemed a lot closer to what the designers of the 2nd Edition setting really wanted to do but might have had their hands tied by the need of a cleric class for healing. Because elemental worship was an important part of the setting, we kept that alive in the themes, specifically the elemental priest theme.

Firstly, regardless of the intent of the 2e designers to include clerics who worship the elements, it became a major concept in the Dark Sun setting (with the supplement Earth, Air, Fire, and Water truly solidifying the idea). The elemental cleric/elemental worship concept also spawned key characters in during 2e, such as Caelum the sun cleric and the Magnus the windsinger from the Prism Pentad, and Oelus the earth cleric from the Brazen Gambit. Secondly, though we were given the elemental priest theme in 4e, it always seemed too little and too vague to convey the concept of elemental worship seen in 2e. So despite the possibility of some level of elemental connection for races and classes, a truly elemental experience wasnt fully implemented in the 4e Dark Sun Campaign Setting (though we cant overlook the Genasi of Athas in Dragon 396). Enter Heroes of the Elemental Chaos.

Rather than give a general review of the supplement (which can be found in numerous places online), lets go over what the Dark Sun centric player and DM would be interested and show that Heroes of the Elemental Chaos is worthy of being called a Dark Sun supplement even if its not advertised as such.

It has been 15 centuries since my people were born in the image of Dregoth the Father, our creator. It is said that he traveled the Plane Below for countless eons before returning back to the world bearing the spoils of a thousand conquests. Using the knowledge of creation gained from primordials on his journey, he created the first of his children imbuing them with gifts torn from the Elemental Chaos. Those mortal containers proved too weak to receive these gifts and so many perished. Dregoth then gave life to the second of his children, born in his true image. To these Dregoth gave hearts of stone, blood of acid, and breath of fire to cause fear in all his enemies. When you ask what I know of the elements, I say that the Elemental Chaos lives within me, a gift from the Father.

The overview of the primordials and elemental princes was very thorough, and though these primordials may exist in Dark Sun, two are mentioned as being exclusively Athasian:

Though both were mentioned in the Dark Sun Campaign Setting (in slightly more detail) and Ul-Athra having been the subject of Marauders of the Dune Sea, it is still good to put in perspective that they are but two of many other possible primordials... and that they are free.

In the days following the Dragon's return to sanity, Borys saw the need for Rajaat's prison to be sufficiently protected from those seeking it. Since the prison needed to be of sufficient power to keep even Rajaat's former champions away, Borys reached into the Elemental Chaos and let magma bleed into the world, sparing naught but his kingdom of Ebe. This breach did not go unnoticed. Chlimbia, Prince of Magma, came forth with his evil host to quell the thief of his domain and to use this wound in the world to expand his dominion. But Chlimbia had been away from Athas far too long, and was ill-prepared for both the defiling and psionic power the Dragon embodied. The battle raged, with the area even beyond the newly formed lake of fire desolated. The Dragon, seeing a need to have even greater control over his valley of dust and fire, imprisoned the Prince of Magma between the Plane Below and the world so the primordial's inherent power would continue to power the lake of fire's magma flows. Chlimbia's imprisonment had an unintended consequence for the Dragon and his plans, as imprisoning the primordial trapped many of Chlimbia's servants on Athas. These beings now dwell permanently in the lake of fire eternally seeking a way to free their master, and themselves.

I mentioned above that 4e Dark Sun was lacking in focused elemental devotion. Heroes of the Elemental Chaos gives us several themes that fit near perfectly with both old-school Dark Sun thinking as well as the spirit of the 4e setting, specifically:

Those keeping score will note that I left out the Demon Spawn, Ironwrought, and Janissary. These shouldnt be excluded from a Dark Sun campaign by any means, but focusing on the classic concept of elemental worship is captured more completely in the 5 I note above. The Ironwrought might not seem like it fits Dark Sun well, which is fine, but have a look at this statement in the description:

"Less prominent elemental provinces include all manner of phenomena from magma to ice, and smoke to metal. Although devotees of these lesser forces might be rarer than others, they are no less capable than other users of elemental magic."

The Ironwrought is in fact a para-elemental devotee. Let the flood gates open and allow the silt, magma, rain, and sun devotee themes come forth (preferably in a DDI article)!

More often than not, Primordial Adepts whose patron is of an evil nature, imprisoned, or both, and the cults of the Broken Builders find working together mutually beneficial. That's not to say that all Primordial Adepts wish for the complete destruction of the world or that Broken Builders have any strong connection to a specific primordial, but each group gets what they want: Adepts attempt to convince Builders to further his patron's will and the Builders hope that an Adept can help free a primordial to recreate the World. Despite this relationship, Adepts and Builders all too often find their goals at odds with each with other: With Adepts seeking to control elemental power and Builders seeking to take power away by destroying the World as it is. Whatever the reasons, Adepts of evil primordials and Broken Builders are not often found apart. 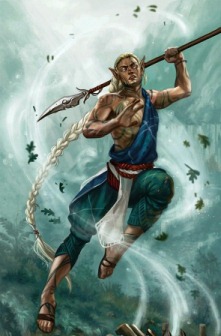 As the Lands Within the Wind began to recede, a few Eladrin struck out into the world to explore. These Eladrin, known to be true masters of the Way, sought to establish Eladrin monasteries far from the city-states and their inhabitants, and so dwelt for a time beyond the reach of mortals on the edges of the world where the Plane Below presses on the world and elemental terrors roam. A hundred years ago, one of these masters returned. Though his body was broken by untold hardships, his mental state was quite the opposite. From his experiences beyond civilized lands, he concluded that as the Elemental Chaos created life, so must the Elemental Chaos dwell within all beings. For an individual to survive, one must then take control of this chaotic energy. This tradition later became known as the Desert Wind and is taught to anyone that is strong and devout enough to master elemental energy. This practice has now found its way into secluded monasteries far from the city-states and often draws those looking to control not only the forces of the Elemental Chaos, but the chaotic forces within.

If you played during the 2e days there was no greater Dark Sun supplement than Dragon Kings for high level play. Within its pages we found how to become a Dragon or Avangion (wizards), Member of the Order (psionicist), or an elemental (elemental cleric). The 4e setting gave us epic destinies of a similar nature: the Dragon or Avangion (wizards), Member of the Order (psionicist), and the Pyreen (primal classes). Thats right, in the 4e setting and its lack of a complete elemental character concept, even elemental priest themed primal characters had only a life as a pyreen to look forward to. Heroes of the Elemental Chaos gives us an epic destiny that has been sorely lacking, the Emergent Primordial. If your character was to worship the elements - and I mean really making elemental worship as a key role-playing aspect - ask yourself which epic destiny you would choose. I think we all know the answer to that. Becoming a pyreen is great for a primal character, but becoming a primordial is the ultimate destiny sought by elemental worshipers.

In a world like Athas, where elemental worship is prevalent, the rewards granted by the elements should also be prevalent. Elemental Gifts are easily understood and should certainly be included in any Dark Sun campaign. What should really draw your eye though are the Primordial Shards. If a DM needs an element-based campaign, these are the key to all sorts of elemental action and adventure.