"What your father told you" is an old net based project that details the lives and perspectives of various Athasians across the Tablelands.

What Your Father Told You: Defiler to Student 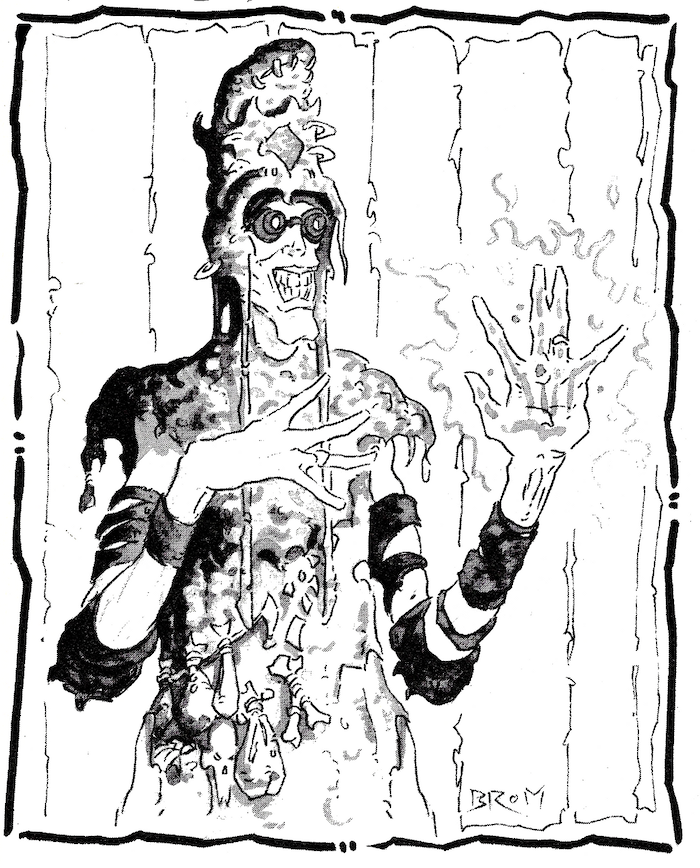 Here are the answers of Xirathus, a bitter-hearted, power-hungry high-level defiler in the service of Hamanu to his student Dakins, later known as Dakins the Cruel.

As you have witnessed with your own eyes before I took on you from your miserable life, most of our world is barren. Only the strongest and bravest can bear the scorching rays of our crimson sun, and some areas are so arid that you will probably end up as a desiccated husk in a matter of days, or so deadly that you can only face them armed with powerful magic - that sort of magic I’m trying to instill into your worthless mind.

On the other hand, in the cities or near them life is much easier. We have plenty of water instead of scavenging a few drops, we have a comfortable life compared to the scum who thrives a meagre existence out in the wastes, we have slaves for the heavy work.

They’re like the one we live it, stupid brat! Urik is the greatest of them all, but I’ve visited Tyr, Raam, Gulg and the shady Nibenay in my life, and they’re all similar. Huge, with a crowd of busy people, slaves carrying around their masters’ goods, templars having laws respected, and free citizens doing their craft.

Anywhere they can fit. Villages, mainly - small communities. Forts owned by the trading houses, even nomadic tribes who roam the desert. I even know of tribes entirely composed of criminals, escaped slaves who band together and live in the wastes to steal from the merchant caravans. They live a miserable life, but what can you expect from scum like that?

You mean what races have survived through the ages?

We’re humans, even you know that far. We are the most numerous, we dominate the city-states; our monarchs are humans, as the trading houses are. We were born to rule over any other race, never forget that!

As for the others, down in the shadowy recesses of the market you will certainly have seen the elves. They are very tall and light, with an incredible endurance for running - believe me or not, they never ride a bug! Never trust them, even if their ‘services’ are sometimes worth the silver they will certainly extort from you: they are a treacherous lot, but really good at that.

Half men, half elves are rather common, too. It seems some human sluts can’t avoid falling in for a handsome elf. The wretched bastards often even try to mock the customs of one race or the other, but they are never accepted, and they never will! Watch for their ears - they’re pointy, just like those of their elven ancestors - they can almost look like us, but in their veins runs the cursed blood of their ancestry.

You have never seen a dwarf, you say? I’m not surprised, as your education before my kind allowing you as my student was simply non-existent. They’re short, but very strong. Powerfully built, with massive shoulders and mostly bald scalps. In their way, they are a proud race - they never accepted to be conquered. Their love for labor is their fault, anyway. Most of them toil their entire life to fulfill their twisted mind’s goals, just to bite the dust with their goal - their ‘focus’ I hear they call it - unfinished, and the promise to become an undead parody of their former selves. Ah!

The half-breed offspring of dwarves and humans are muls, hairless and even stronger than their dwarven ancestry. They’re slaves, of course. They make good gladiators - they can be really mean - and bodyguards for the decadent and lazy nobles that infest our cities. Probably, you’ve seen them in the arena.

What else? Far from here, in the forests live the halflings, nothing more than a very short race of savages. Yes, they can be even shorter than you, and usually have cannibalistic habits. They could be amusing for a while, but they don’t make good slaves, as they usually let them starve rather than serve their rightful master.

At the gates of the city you will have noticed half-giants. Yes, the ‘big ones’, the ones that templars use to crush people not complying to their orders. As a race, they are big, strong, heavy idiots. Dumber than a mekillot, but with strength enough to crush you like a ripe fruit with their bare hands.

Finally, there are the kreen. A race of insect-men. I’ve met only a few of them, but they make terrific gladiators. They have four arms, and claws, and poisonous fangs, and a sort of fascination with hunting their prey.

There are a few specimens of other races - scaly humanoids called ‘pterrans’, and winged birdlike creatures called ‘aarakocra’, big ugly brutes called ‘tareks’ and a score of other races, but you’ll almost never see them around, and I’ve already wasted enough of my time!

There are those who wield power and those who don’t.

All the others cannot touch the infinite like we do, and have to cope with a miserable existence for their whole life. From the wealthiest of the Nobles to the lowest of the artisans in the Painters’ District, they are all equal - beyond their money, they are nothing. They can show a spark of genius, or be rich and influent, but they lack power.

At the very low there are the slaves. They are our tools, nothing more than beasts of burden in humanoid form. They are property of the wealthy, born and bred to fulfil their needs and whims. Artisans keep slaves to quarry stone or carry their goods, nobles use them to tend their estates or to delight their debauched flavors, templars and the King train them to amuse people when dying in the arena.

The Sorcerer-Kings are the greatest of our kind. They are individuals of incredible powers, both magical and psionic. They rule our dying world, and they will always do. They impose their will through strength and power. I’m honoured and lucky to serve the mighty Hamanu, King of the World, as his arcanamach. But remember! The mighty Lion’s patience is infinitesimal: never anger him! Neither bones nor ashes remain of the last wizard who dared defy his orders. You might think I’m a cruel master, but do not doubt the Lion is a harsher one!

They are individuals chosen by the Sorcerer-Kings to act as their pawns. The King imbues them with his magic, and they administer justice and keep law and order in the cities. Even if they are in close contact with the monarch, never fully trust a templar! They are always prone to betray you, have you assassinated or executed for a non-existent act of treason. They are power-obsessed, from the lowly templars of the Bureau of Wastes to the High Templar who enjoys the trust of the Lion. A scheming lot, but show them proper respect, you turnip! After all, they speak the words of our master.

Who are the Priests? What do they worship?

Just like templars receive their power from the Kings, other individuals get it from the Elements. Earth, Air, Fire and Water grant power to some people who spend their entire life serving them. Most of them are not harmful, even if they are annoying.

Another story altogether are the druids. They are the self-appointed defenders of Athas’ environment. Ah! What do they want to save? A rock, an oasis, a sulphur spring. They are lunatic men and women who defy the power of the Kings and accuse us of being foul beasts who ‘defile’ the world! How pathetic! If you confront one of them, be prepared, for they often wield considerable power, but be sure to have him meet his death in a very slow and agonizing way!

What is the Unseen Way?

All of us have some latent psychic power. I know you move things with your mind, when I can’t see, you fool. I have a slight power of precognition myself. Anyway, some individuals develop their mental energies into a powerful weapon. It is the Way. They can immobilize you with a thought, or damage you with nothing more than their gaze. Our mighty King is a master of the Way, as well as of magic. I’ve seen him with his golden eyes glowing, intensely scrutinizing others for lies using nothing more than his own mind. And woe to anyone who tried to deceive him!

What are the most valuable things in life?

You still have to ask, you kank-head?! Nothing I have said before has entered your little, stupid, pathetic mind? POWER is the most important thing. With my generous assistance, even your miserable and worthless life can change. We wield the power. We wield the magic. Your life, your mind, your money, all is important but secondary. Power is the key that strikes fear into the hearts of men, power is what provides you the luxuries we’re used to, power is all you have, and it’s all that keeps you alive.

You remember when you successfully cast the lowly enchantment of light I hardly taught you? You remember the feeling, the rush of power siphoned from the soil and crawling through your veins? You remember the exquisite pain of the energy accumulating into your body, praying for a way to be released, and the final moment of absolute pleasure when you let it explode through your entire body, while your mind shapes the syllables of the incantation? THAT is magic. That is what we have. We can shape the energies of the world.

Stupid and coward wizards banding together in the ridiculous Alliance call us ‘defilers’, abominations who exploit Athas and leave it barren. What can compare to the burst of delight which comes with every single spell? Plant life withers and dies when we tap its energy, it’s true, but what does it count? WE count, we who have the power of magic, we who are feared and respected for that, never forget!

Where do we come from? Why are we here?

Ah! Other stupid questions from a bone-headed mekillot like you! Better study the simple incantations I taught you than waste your and my time with nonsense like this. We are born, we live, we die. That’s all. Let the dusty philosophers ponder these questions for their entire life - we live for the present, we are strong, why should we care about WHY we are here?

What happens after we die?

As I have seen during the casting of my spells, and for what I’ve read in the Lion’s library, when we die our soul goes to the Gray, a realm where the dead only exist as wispy shades and nothing more, creatures who come to loathe the very thought of life.

Some of us seek out immortality, in the form of an undead creature, something neither dead nor fully alive, which can live almost forever.

About 13 years after these answers, Xirathus was found horribly mauled by some unfortunate accident with a denizen of the Lower Planes - apparently a seemingly perfect circle of protection had a very slight fault. Templars of Hamanu never fully investigated the young Dakins responsibilities in what happened, but the Lion himself promptly promoted him as his personal arcanamach after his master’s demise.