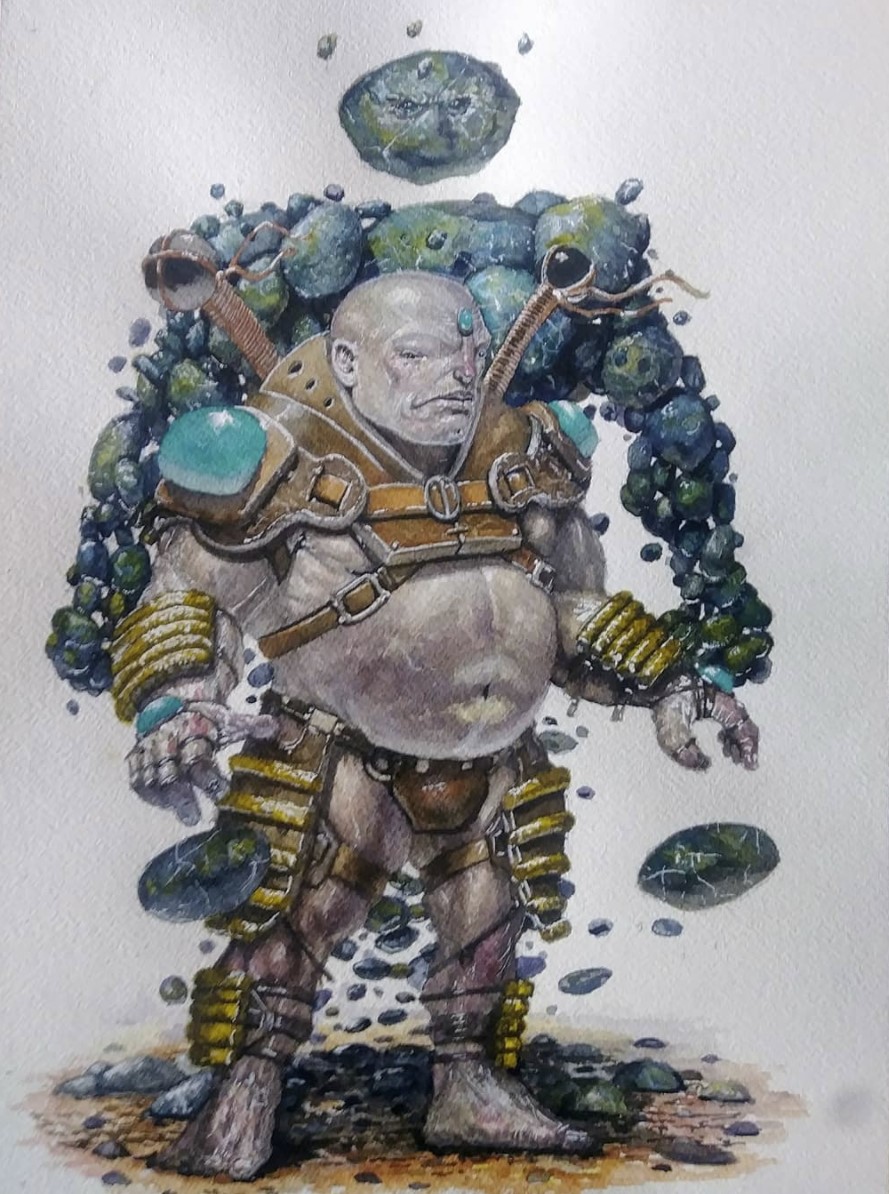 An Earth Cleric to his initiate.

The world is like a dying agafari tree. Once great and tall, now it is gnarled and twisted, roots crying out for water, its branches brittle and hollow. Once, on Athas, there were great forests, mighty rivers, mountains of immense proportions, plains of grass as far as the eye could see. Now, people live mostly in cities, under the rule of Sorcerer-Kings, or they live in small villages. The world is a sun-blasted desert. The soil is barely able to support life, water seeps slowly from cracks in the sun scorched earth. The mountains bleed from Athas’ core, their wind-swept peeks are devoid of life. But with careful nurturing, the dying tree can be brought back to life; so it is with Athas.

What people are there?

There are many different people on Athas. Some have different powers, some can even move through the air, but we are all creatures of the Earth. You have seen many of Athas’ inhabitants, being a city-dweller yourself. Humans, of course, are the most abundant. We are the backbone of most cities. But a fair number of Elves also live there. They are duplicitous creatures the elves, but in a strange way, reliable also. If you can make a friend with an elf, he will be a good one. But they like their money; bribery is as normal to them as drinking water is to you. Always be wary when dealing with them.  Half-elves, elf-human crossbreeds, also mostly live in the cities. They are usually quick to anger, believing for some reason that the world “owes” them something. They don’t often accept help from others. Dwarves are sometimes the best friends an Earth cleric can have. They are dependable, proud, and good in a fight. They work hard. They are a serious people, and are also suspicious of strangers. Until you befriend one, never try to act suspiciously in their presence. They are known to act first and question later. There are other races. Halflings, often said to be savages, have a strange knowledge of Earth and of Athas’ past. Respect that, but be careful. Some really are savages. The mul, dwarven-human crossbreeds, have the best of both parents. They are mostly bred for fighting in the cities’ arenas, but you can sometimes find one in a village. They are strong and intelligent, but sometimes bear the stubbornness of their dwarven heritage. Half-giants are mostly dumb brutes, often serving as guards because of their great strength. Aarakocra are bird-people, living in the mountains. Pterrans are reptiles, beings that revere the whole of Athas. They make wonderful druids, and so are some of the Earth clerics best supporters. You will always find support among the Pterrans. Then there are the thri-kreen, fighting bugs that come from up north.

What do people do?

There are many things people do. In the cities, you will find many slaves, people who are owned by others and work for them. The merchant houses control the cities’ economies, establishing trade routes between cities. Nobles control the farms and land around the cities, where much of our work must be done. Respect them, and keep on their good side. If you can demonstrate to them that we only want to help the land, that we will increase production, they will permit us to do our work.

Our work? What do we do?

We are clerics, my young apprentice; clerics of Earth. We are here to protect and defend the land. We are here to teach the people how to properly use the soil, so that they don’t leave it barren after a few years of use. That is an important part of our training and our Pact. We must also destroy any defilers. Worship the Earth, for it gives us life. Look around you. It is everywhere. It is in the clay used for bricks, the soil that makes your food grow, the grass the livestock eats. It is solid, dependable. It creates the obsidian of your blade, grows the agafari wood of your handle. From the Earth comes iron and even steel. All life here depends on us. It depends upon the strength of the land that nurtures it. That is why we must care for it and protect it. We bear the heaviest burden of all clerics, but the others help us.

Pact? What is a Pact?

The Pact is what we agree to during our initiation. Very soon, young one, you will also make a Pact with the Lords of Earth during your Initiation. It will require you to do all that I have just stated. But it will also enrich your life. You will gain many wonderful powers during your life, and the ability to cast spells.

Defilers are evil people who leech power from the land and use it to cast their spells. Unlike preservers, they take from the land and give nothing in return. They leave it barren for ages, uncaring of the plight of Athas. They are our worst enemy. Be careful around them, they are powerful. Let others do the fighting for you if you can, so that you may carry on against another, but if you have no choice, be forceful. Do not let him escape to destroy any more land. Hold nothing back against the defiler.

What other clerics are there?

The other clerics worship other aspects of Athas, Air, Fire and Water. They are your allies. Sometimes they seem odd, but remember you all have a common goal. Their success depends upon our success. Earth grows the fuel for the Fire cleric’s fires, it builds the mountains for the Air to scream, it grows the plants that hold the Water. There are also people who worship the Sun, Silt, Magma or Rain. They worship the para-elements. Rain clerics are our friends, but the others are evil. The Sun cleric will destroy anything that blocks the sun, and that leaves the soil cracked and scorched, lifeless. The Silt cleric turns the land into useless silt, in which nothing lives or grows. Magma is the bleeding of the Earth.

The druids have always been our strongest allies. They restore Athas to its former splendor one piece of land at a time. They once were many, but the Sorcerer-Kings hunted them down many years ago in the Eradication. You will find few druids now, scattered as they are across all Athas, living in isolated parts of the world to hide from the Sorcerer-Kings. But they understand our fight, and are usually willing to help, if it does not jeopardize their land.

They’re the ones responsible for the way Athas is right now, along with the defilers. They wield tremendous magics, and they are masters of The Way. They rule the cities with an iron fist. Do not cross them, for it usually means death. Use caution when dealing with their agents, the templars. If you do not seem like a threat to their authority, they will leave us alone to do our work, for it often helps the city, and the templar might be rewarded.

The Way? What is the Way?

You must surely have seen Mindbenders before. People who can do things with their mind that ordinary people can’t, like moving things or reading your mind. Their power comes from within, unlike the defilers, so using their power does not harm the land.