What Your Father Told You: Two ex-slaves to a group of children

This discussion is between two adult ex-slaves (Bazook an elf who blows glass and Kamser a dwarf mason) and a group of children. They live in a village north of Nibenay on the edge of the sandy wastes. The village still exists in Free Year 10-11 and is one of the oldest in the area.

Kamser - The world is a barren desert, hideous monsters lurk behind every boulder and even threaten the very existence of our community. Fortunately a few strongholds of civilization like this village still exist. The unity of people and a strong organization are the only things that prevent ourselves from leaving the face of Athas forever.

Bazook - Athas is truly a desert, most of the places I’ve seen in the past are like the area surrounding us: stony barrens and endless dunes. Still Athas is beautiful, the dawn over a calm Sea of Silt although rare is amazing and the mountains at sunset are as red as blood and make me remember of my old travels when I used to run all day. Also I once saw the far forest ridge, a place where a lush green vegetation does exist, I will never forget that view. 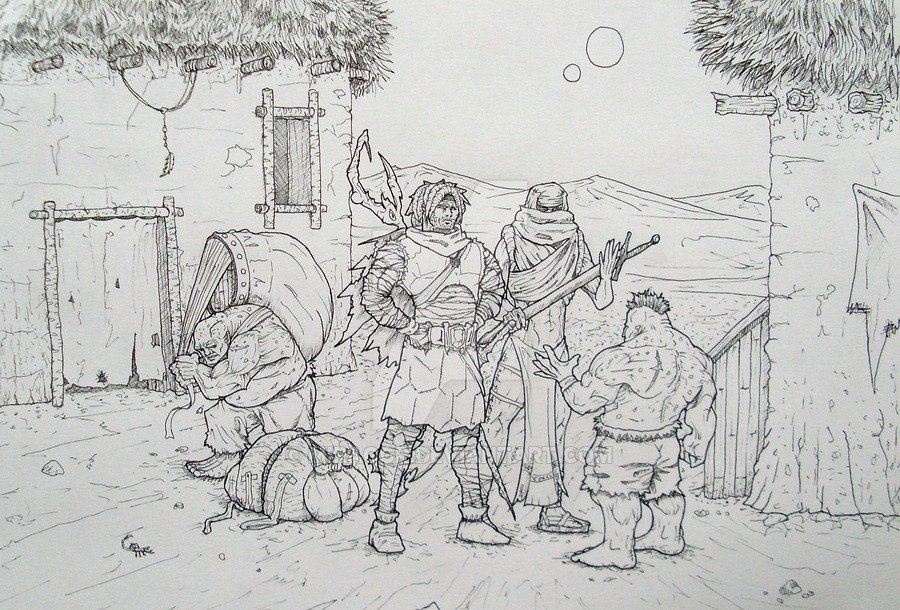 Do you know if the world was different in some old time as in some legends?

Kamser - The father of my father told me that once the world was different and that one of his grand grand fathers lived in a great underground city under a hill. He was a great artisan, forging weapons and other items made of metal. I cannot even think how the landscape or the society were at those times, no one knows for sure as the memory of those ancient times is almost lost.

Bazook - The elves don’t remember an old age but I don’t have a reason to disbelieve what Kamser says, after all ruins are scattered everywhere, even this village was built starting from old foundations. If a great age of glory ever existed the only ones able to remember those times could be the sorcerer-kings. Legends say that they have been living forever and gave civilization to the tablelands but some years ago one of them, Kalak of Tyr, was killed by a group of heroes.

Kamser - There is no proof that those rumors are true.

Bazook - Still the last time I went to the city [Nibenay], I could hear even the templars whispering about it, saying that Kalak was puny if compared to the might of the Shadow King to defeat their fear of becoming ex-templars. The fact is: a sorcerer-king died!

Kamser - Most both here in the village and in the rest of the world are humans, they have no real unity as a race and tend to fight among themselves. This is true for elves like Bazook too but humans are unique for their extreme lack of respect for everything, including their own kind. I’m a dwarf of course, all dwarves are short and strong, well suited for hard work. We don’t exactly like to work but we like the results of our fatigue: I built more then half of your houses and I’m proud of my work, in fact I’ve decided that the purpose of my life is that of providing a place to call home to everyone who lives in the village. To have a purpose in life is important: it lets you focus your energies in a better way and at the end of a day of work you will contemplate the results of your efforts and say “THAT’S what makes it worth to live.”

I’ll talk only about another race before letting Bazook continue (he has traveled a lot more then me): the muls. My son Urgin is one, as you see he’s much stronger then the other children, when he will be fully grown he will be even stronger then me and taller then most in the village. Muls are almost always bred in captivity and Urgin is no exception, he was meant to be a slave and to fight for the delight of the citizens of Nibenay. When I escaped I took him with me as my son although I don’t know who his parents are: no one deserves slavery, let alone a child.

Bazook - Elves are like me, taller and thinner then humans with pointed ears. My kind likes to travel the desert more then anything else, their second occupation is to fool anyone outside the tribe.

Bazook - Well, it’s a little like our village. Every tribe is a community with more or less common origins and beliefs, some are traders, others are raiders. The nature of elves can be very different from one to another. All tribes share a common background and all elves share the love for life. An elf will seldom die sitting by a campfire in old age, most prefer the heat of battle, lust or simply risk. To an elf life must be worth living, if it isn’t the elf is already dead in the heart and will do anything to get new excitement.

Kamser - Under a certain view all elves share a common purpose for their life albeit a quite instinctive one, it seems to be in their blood.

But you don’t seem to fit with the description of an elf…?

Bazook - Yes, to the eyes of my people I’m a renegade, no more an elf. I left my tribe following my taste for beauty, that’s why I blow glass, I find it necessary to me to create beautiful things and having many of them around me.

Are there other races?

Bazook - Yes, but they are more difficult to meet, in my life I’ve seen the big intelligent bugs called thri-kreen which are mortal enemies of all elves. I met a group of halflings a few times too, their adults are as tall as the children of humans and have almost the same built. They are considered savage but I had the opportunity to talk with one and he simply had a very strange culture he was no savage cold-blooded killer. Exactly to the opposite of the halflings (at least in size) there are the half giants, they are taller then two men one on the shoulders of the other, they are not too smart but even stronger then a couple of muls. They change behavior following the wind.

Finally there are those like my daughter Maseera, she is an half elf. Her kind is not seen kindly in most places because many were born unwanted or even hated and probably abandoned or sold into slavery. To many the concept of half breeds of two races is wrong and twisted but I have a human wife and wouldn’t change her with anyone else.

Kamser - In the cities life is complex but you may divide the citizens in these groups: nobles which have most power, templars who serve the sorcerer kings and have the power of law enforcement, slaves and would-be slaves. There is no freemen in the cities, at a templar’s whim anyone may be imprisoned, executed or enslaved, even nobles or other templars. The only place where everyone is free, at least until he manages to live, is the desert.

Remember that citizens are never free, not even when travelling the sands, they carry their caste system within themselves.

Kamser - Who knows? They are wizards and mindbenders, other then that no one really knows except perhaps other sorcerer kings. They are so powerful that they may grant magic to the templars which use and abuse it.

Kamser - The templars were people like me and you but mad for power and evil to the bone. Officially they serve their sorcerer-king but in reality they serve only themselves. They are greedy and selfish beyond your comprehension. Their word is law and they may imprison anyone on a whim.

Bazook - The templars also are the keepers of law or at least a resemblance of it. In the city of Raam where the sorceress queen mysteriously died there is civil war and a lot of people is dying, more then in many years, sometimes an evil law can be better then no law at all.

Tell me about the Cities.

Kamser - I’ve already pointed out that the cities are not safe places to live, at least until the sorcerer kings rule them and the templars are almost all humans: the dwarves and the other races are just tolerated there and anyone that cannot bribe the templars (even a human) will become a slave sooner or later.

It is said that once the cities were places of knowledge and life, not slavery and death but those times are gone forever.

Bazook - In villages like this of course, they may be built on top of the mountains or on the bottom of the salt plains but they all share common traits. Life is hard everywhere and the threat of being discovered by slave-traders is always present. As I said before the elves are nomadic: they are not the only ones, many tribes of other races (mainly humans) do not sleep in the same place twice.

Kamser - Magic is unnatural, the energy for the spells is taken from the land itself, Bazook told me that there are two kinds of wizards: the defilers and the preservers. Although the preservers seem to be somehow better then their companions I’ll never really trust a wizard. I’m no expert but I guess that we must thank magic at least in part for the desert in which we live, magic destroys vegetation and leaves a sterile terrain where nothing grows.

Bazook - I must say that I’ve met wizards and that not all of them were evil, a couple were preservers which were worried about the death of Athas as me, Kamser and you. I speak for what I’ve seen.

Kamser - We, the dwarves, are like bricks: made of earth and water, baked by the sun and eroded by the wind. All the races of Athas have been given life by the elements.

Kamser - Everyone is born to fulfill a task, there’s a place for everyone and everyone has a place, when you’ll grow up you’ll recognize your place.

Bazook - We are here to survive and while surviving we must try to live.

What happens to us after we die?

Bazook - There is definitely something beyond death. The dwarves think that the righteous rest in peace for eternity, most elves believe in a green garden in which every sense is satisfied, maybe the halflings believe they will hunt forever their preferred prey but in the end who knows?