And old Net Project that details the perspective of various Athasians.

By Michael Cugley This is from the point of view of a city-dwelling human freeman. It isn’t aimed at any particular City-State or time, although it does assume the Sorcerer-Monarch of the city is still alive.

The world is a desert. Nothing grows anywhere, except near the cities. Out in the desert there is no water, sandstorms drive sand so hard it will scour your skin and choke your lungs, and terrible monsters and raiders ravage the land. Only near the Cities can people live, and maybe in some small villages. Near the cities, there is enough water for farms, there are walls to keep out raiders and monsters, and Templars to protect us from criminals. The city is life. The desert is death. 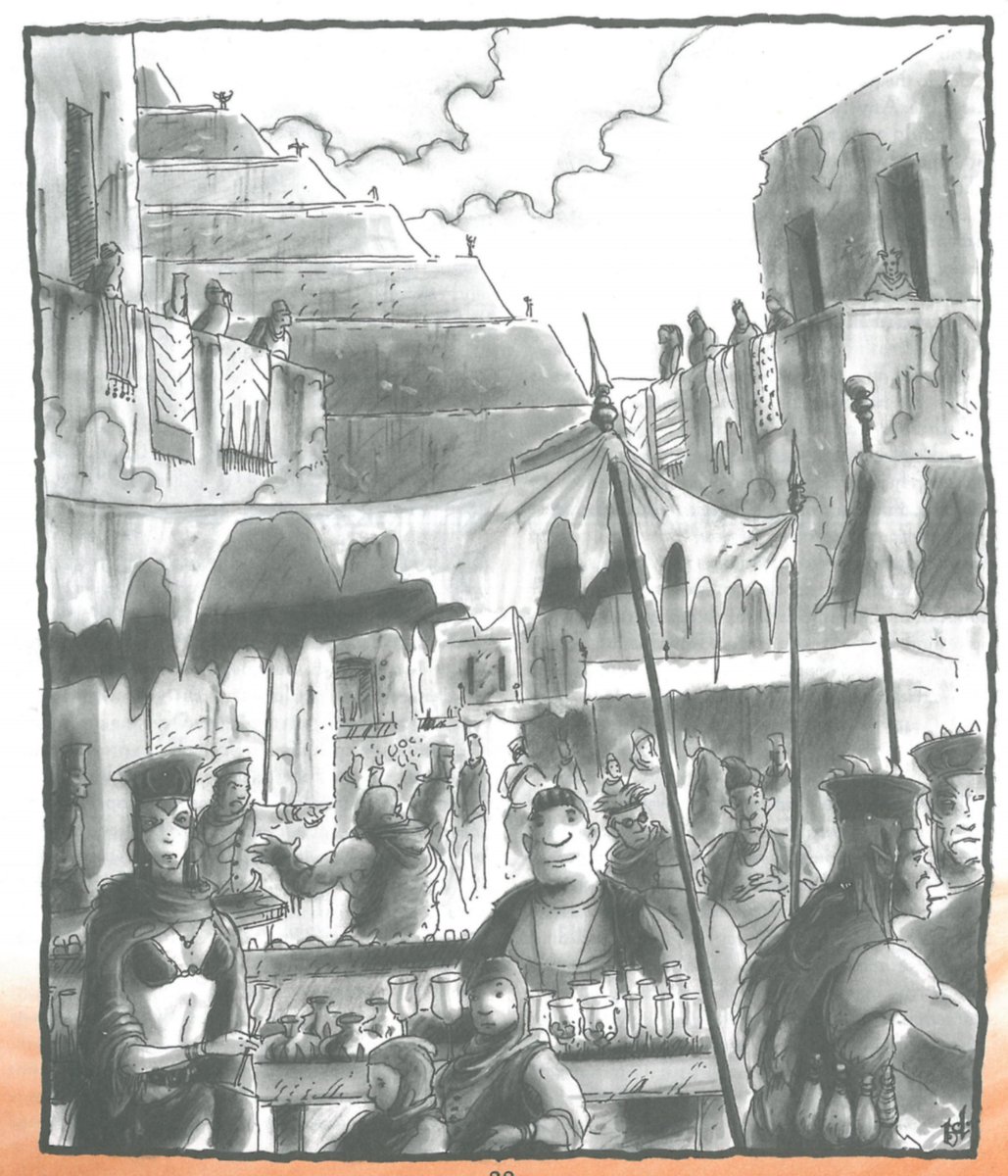 There are many peoples in the world - but some I have only seen in the Arena. The most important people are like us - humans. There are more of us than all the rest together. The Noble families and Merchant Houses are almost all human - the Templars too. The Cities are human places, although other races come here to live. We made the cities, and the trade between them that keeps everyone alive.

In the run-down part of the city you can find Elves - much taller than us, and thinner, with pointed ears. They mostly live in the desert, travelling from city to city, raiding and stealing, and selling their booty at the next city. They have their markets where you can buy anything - if they don’t cut your purse first - or your throat. Never trust them.

You’ve probably seen Dwarves around - no taller than a boy of ten, but as wide as a full-grown man. They are hard workers, single-minded and dedicated. Once they have set their mind to something, they will do anything to complete it. I’ve been told they have their own villages, where everyone in it is dedicated to the same task. I’ve also heard it said that they believe that if a Dwarf dies with a task undone, they will raise from the dead, to terrorise the living.

There are other races, too, but you won’t see many of them, except in the Games. Who you will see more are the half-breeds, when people of different races have a child.

The Elves have charms but no morals, so they often leave children when they leave. These half-elves are shorter than true Elves, so they can pass for human, sometimes, but you can tell if you look carefully. No-one likes then, neither human nor elf. They don’t form their own communities, but live where they can, wherever they can make a living.

Dwarves have their half-breeds, too - the Muls - but they usually are bred deliberately by Nobles or the Sorcerer-King. That’s because Muls are build almost as heavy as Dwarves, but tall as a large man. Like Dwarves they are hard workers - they can work for days at hard labour. Most are slaves, labourers or soldiers, but some have managed to win their freedom. If their sheer size doesn’t give them away, you can tell a Mul by the ridges over the eyes, the swept-back ears, and the fact that they have no hair anywhere.

You’ve seen the Half-Giants, I’m sure - it’s not easy to miss someone twice the height of a man. They were created by the Sorcerer-Kings, they say, from men and huge giants from the Desert. Half-Giants are incredibly powerful, but not very smart. Most of them work as guards, with the Templars or Merchants, or fighting in the Arena. From what I’ve seen of them, they are good at copying people, which makes them adaptable workers, if a little slow. I hear they can also be a changeable people, kind and gentle one day, cruel and vicious the next. Be careful around them.

There are other peoples too - the wild little Halflings, or little people who live in the mountains in the West. Insect-people, winged bird-people, and reptile-men. I’ve only ever seen them in the Arena, when some great hunter captured some of them to fight for the crowds. Little better than monsters, I say.

Other than the Sorcerer-Kings and their Templars, there are really only three kinds of people - Nobles, Freemen, and Slaves.

The Noble families have incredible wealth and power. They own vast tracts of fertile land, and legions of slaves to work them. On their estates, or in their walled city mansions, their word is law. Only the Sorcerer-Kings and the Templars can lay hands on a noble and live, and only they have more power, and even the Sorcerer-King must listen to the Council of the Nobles. Apart from the Sorcerer-Kings and their Templars, only Nobles are allowed the secret arts of letters.

We are Freemen - no-one owns us, and we can make our own way in life. We are the artisans, crafters, bakers and makers. The laws of the Sorcerer-Kings protect us, so long as we keep them and pay all our debts. We have the right to live in the city and make our living as we choose to.

There are merchants too - they’re different, though. They owe allegiance to no city - nor are they citizens of any. They belong to their Merchant Houses, who hold large trading emporiums in each city. They trade goods between the Cities, bringing needed money to the City. They are allowed to stay because they contribute to public works, which benefits us all.

Everyone else is a slave. Slaves are property, like an erdlu or a mekillot. They work in the farms, the Sorcerer-King’s armies, the Nobles’ estates, the freemen’s workplace. Every menial, dirty, dangerous task there is, there is a slave doing it. Slaves are the lowest of the low. A freeman who disobeys the Sorcerer-King’s laws, can become a slave. A freeman who loses control of debt can be sold as a slave to pay the people they owe. You must work hard, and obey the law, to keep yourself and your children free.

They are the most powerful people in the world. They rule the Cities. Their word is law. Through their power, they give mighty powers to their Templars. They themselves command great power. When they fight, miles of land are desolated. They have ruled for centuries. They will always rule us.

The Templars are the living instruments of the Sorcerer-Kings. They draw their fearsome powers directly from the ruler, but even more, they draw authority. Their word is the word of the Sorcerer-King, and that word is law. They manage the complex business of running the city, and they patrol the streets, ensuring the Sorcerer-King’s laws are upheld. Never oppose them, for the power of the Sorcerer-King, through them, will destroy you. Anyone can be chosen to become a Templar. They are taken as children to the Templar’s halls, to be trained and initiated into their new service. It is the greatest honour for one of your children to be chosen.

Tell me about the Cities.

The cities are the only safety in a world of danger and death. Outside the cities are the deadly wastelands, full of terrible monsters and savage raiders. Inside the cities we are safe. Inside the city the walls protect us, the Templars protect us. In the city, you can get enough to eat and enough to drink. You can work for money, own a home, perhaps even a slave or two. You can go to the Arena and see the gladiators fight. Life is good in the city.

Where else to people live?

There are some villages, which the Merchant Houses use as trading posts, or because there is something valuable there to exploit. The Dwarves have their villages where they do the things that they do. The Elves, insect-men and the other creatures roam the desert. They live hard, dangerous lives.

Magic is a perversion of nature, stealing the essence of life to perform unnatural acts. I saw a wizard once - a crowd of people had caught him, and were going to stone him. I saw a circle of ash on the ground - he had cast a spell to try and get a way, and had leached the very life from the ground. Never allow one of these creatures to exist. Fear them, shun them.

What is the Way?

The Way is the power of the mind. The Will is the power, and the Way is the teaching to use it. The Templars get their power from the Sorcerer-King, and the Priests say they get power from the Elements, but the Will comes from within yourself. With practice, or teaching, some people can use the Way to perform amazing feats - reading other people’s thoughts, moving things from afar, even moving from place to place. They say almost everyone has enough Will to do at least something, but not everyone learns to harness it. If you find you have some ability in the Way, you should learn to use it the best you can. There are schools where you can learn, if you can afford the fees. Those truly proficient in the Way can command great sums of money. Powerful mindbenders are in great demand.

Who are the Priests?

They are people who have given their lives over to the Elements. They believe that the world is made up of mystic Elements - Air, Earth, Fire, and Water - and that these powers have influence over our lives. They worship these powers, and they say they gain power from them in the same way Templars do from the Sorcerer-King. I don’t know if what they say is true, but I have seen a Priest of Earth heal a broken arm by rubbing the wound with a little earth and saying a prayer. Some of them are crazy, though, and speak out against the Sorcerer-Kings. You should be careful of being seen with them.

We come from our fathers and our mothers. What more is there to know?

We are here to work, to keep ourselves and our families out of slavery, and to make our lives as comfortable as we can.

What happens to us after we die?

Our bodies get burned, or put into the ground. Some people say we become spirits, wandering the land, or we go to another, more fertile land as a reward for our sufferings. But what really happens is we no longer exist. We must work as hard as we can to make our life as good as we can.