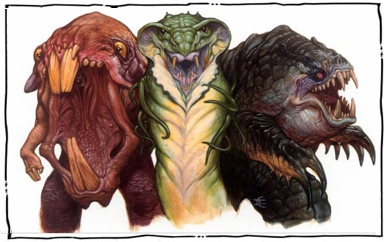 The only serious modification I made was to include a bounce from one table to the next. This adds to the danger of Athas, and it makes room for a slightly more random effect to the spell. Am I the only one to notice that there is no Monster Summoning VIII spell? At least now I've justified the 8th table.

Included in the tables are "natural" monsters. There are no undead, "created" monsters such as golems, or carnivorous plants in the tables. Lastly, keeping to the spirit of the original monster summoning tables there are no highly intelligent monsters or player character races to be summoned.