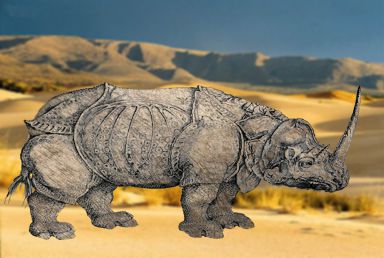 Rare and mythical even in the Green Age, the Athasian unicorn survives today only in the foothills and Scrublands South of Kurn. Even the vast majority of herders and Kurns have never seen a "unicorn" in their lives, although they have all heard of them. Typically, travellers that cross paths with an Athasian unicorn are none the wiser, since the creature uses its abilities to conceal itself. However, once the unicorn has seen them, it is likely to keep an eye on their trail for a few days. If the travellers defile the unicorn's territory, or light campfires during dry summer months, the unicorn might choose to make an appearance.

Unicorns have a strong dislike for smoky fires. Lone unicorns have been known to rush into the middle of a campsite, stamp out the fire, glare briefly at the campers, and disappear into the scrublands.

Unicorns collect gems and keep them in a cavity in their cheek. One of the gems is invariably a crystal capacitor/cognizance crystal.

Due to the influence of Spirits of the Land on Oronis, and because of the influence of the druids on Kurn's Tribunal of lawmakers, selling Athasian Unicorn parts is illegal in Kurn. A unicorn horn can be cut into a dagger or spearhead that naturally functions as a +1 psionic weapon, and the total blood of an infant unicorn can be used to reverse a year of aging. Their thick folds of hide make good hide breastplates, but do not confer any special AC advantages over regular hide armor. Their ground hooves may be used as a component substitute for a number of powerful defiler spells.

Unicorns enjoy a close relationship with the spirit of the land, and have been known to communicate via mindlink with select Grove Masters. Spirits of the land sorely grieve the passing of a unicorn. Unicorns always know if a tree of life has been planted in their territory, and will frequently visit and protect it.

While Kurn sages believe that the savage Braxat of the dry lands descends from early Athasian Unicorns, the temperament of the unicorn seems unaffected by the cleansing wars and the thousands of years of desolation. While their relationship with the Spirits of the Land have imbued them with new powers (such as magic resistance) and influence, the Unicorns continue to live as they did thousands of years ago: raising their young, one at a time. Each unicorn stakes out a solitary territory (usually dozens of square miles; equivalent to the territory of the local spirit of the land), and hardly ever leaves that territory except for mating. With a lifespan of ages, Athasian unicorns mate for life, but live most of their lives separately. Every decade or so a unicorn will find its mate, and stay together through a full year of pregnancy, and another full year of raising the infant. After two years, the mother and father part ways again, and the young unicorn stays with the mother for another year. Thus when a unicorn is encountered, it is usually a lone unicorn (90%), sometimes a male unicorn with a pregnant female (5%), sometimes a female unicorn with a 4-9 HD/level yearling (5%) and very rarely (1%) a male, a female, and a d3 hit-die/level infant.

Kurnan artists often laborfor years and risk their lives to get a glimpse ofa young unicorn, which Kurnans regardas the ultimate symbol of innocence and purity. Unfortunately, other humans are more often interested in the Unicorns' horns and blood. Such hunters often light smoky fires in the known territory of a unicorn, to try to lure it into a trap. Fortunately, Druids and patrolling Kurn templars are also attracted to these smoky fires.

If a solitary unicorn is personally threatened, or if its territory is defiled or damaged in some way, it will only attack if it is confidant that it can best its opponents. When possible, it manifests psionic powers before charging. If the offender survives a charge attack, and has not tried to retaliate or injure the unicorn, the unicorn may (75% for flame-users, 25% for defilers) let the offender retreat peacefully. However, when cornered, or when their mate or young are threatened, Athasian unicorns attack without fear, mercy, or reprieve.

Charge (Ex)
If they have the space to make a charge attack, they do so for double damage.
Psionics (Sp)
Athasian Unicorns can use the the following psionic abilities at will Displacement, Schism, See Invisibility, Trail of Destruction* "on" continually. 50 power points which the unicorn can spend to manifest the following powers: Body Adjustment, Fate of One, Harbinger 4, Immovability, Negate Magic, Negate Psionics, Sensitivity to Psychic Impressions, and Still Life; all manifested as by a 10th level psion.
Awe
Those who see a unicorn must instantly make a Will saving throw (DC 20) or stand frozen in awe for 2d12 rounds. If their saving throw succeeds, then they must make a second Will saving throw at a –4 circumstance penalty, or lose their ability to speak for 1d4 days. After the encounter, all members of the party are affected as per the Mindwhisper power.
Spell Resistance
Athasian unicorns have SR 20.