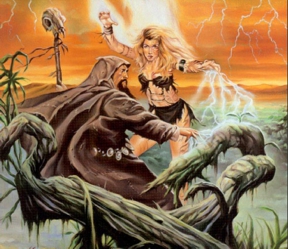 The original AD&D 2nd edition Dark Sun boxed set first brought the concept of defiling to the fore by defining the key concept on how it functioned: Magical energy is drawn from plants. Drawing this energy caused a defiling radius of grey-black ash, and though the energy is coming from plants, animals were still affected being caused some minor pain resulting in a reduced initiative for those in the defiling radius (you may recall that initiative was rolled each turn in 2nd ed.). There was also the hint of a source of energy other than plants with a reference to the sorcerer kings and other wizards at level 20 and beyond using animals. This was expanded upon in the Dragon Kings supplement and the Prism Pentad novels and used animals as well as plants to power spells. In the original boxed set, defilers were a completely separate class of wizard with the primary feature being that the defiler leveled faster than the preserver (a stock 2nd ed PHB wizard). The notion of the defiler being a separate class lent to the idea that defiling was not a choice of the wizard, but a constant always-on feature of the defiling class.

Soon after the original Dark Sun boxed set, the Prism Pentad series of novels began to set a different stage for the defiler. The biggest difference presented in the books was that defiling was a choice and not an always-on feature. The idea of a choice was a profound change to the concept, allowing the act of defiling to become a deep philosophical decision made by the defiling character. An added change to defiling was that spells used with defiling were made more powerful, so making the choice to not defile was a difficult one when a character was in danger. The series also expanded on dragon magic which used animal life to power spells through the use of obsidian.

The choice to defile was attractive enough that an article in Dragon 202 introduced rules for a preserver to defile. Adding the ability to choose to defile and at the same time having the defiler as a separate class led to some creative implementation, indicating that preservers have longer casting times than defilers, translating into different initiative modifiers (with the advantage going to defilers). The new rules also allowed for a preserver character to defile, become tainted (and possibly redeemed), and then become the defiler class. These new rules also gave preservers choosing to defile increased spell effects, more spells, and faster casting in the form of the defiler initiative modifier. Both the choice and the increased spell effects made the rules more in line with what the novels had put forth.

The expanded re-release of the Dark Sun Campaign Setting kept the overall idea of a separate class, with the defiler advancing more quickly and an initiative penalty in a defiling radius. It also incorporated the concept of choosing to defile and the possibility of a preserver becoming a defiler, but also added the idea that a defiler gathers (and defiles) when first memorizing spells, and intelligence checks at the time of memorization determined the number of spells known. Later, the Defilers and Preservers supplement would add to these rules by allowing defiling off-stage (presented in the expanded boxed set) or in-play which defiled at the time of casting. Whichever method of defiling was used, intelligence checks would dictate how many spells a defiler had available.

With the advent of the 3rd edition, Dark Sun players found themselves with two play options. The rules presented by Athas.org and those presented in Dragon Magazine 315. The Athas.org concept most closely mimicked what the collective conscience of Dark Sun players believed defiling should be. Using only a single wizard class and giving that class the choice to defile/become corrupted/and possibly redeemed, Athas.org maintained the idea that spell energy was drawn from plants. There was still an affect to all but the defiler in defiling zones but unlike the past, all rolls (attacks, initiative, saves, etc.) were affected. Additionally (and more in line with the books), a defiler could extend the casting time of the spell to increase its power as well as the defiling radius. What also made the Athas.org rules ahead of their time was the use of feats to augment the act of defiling. The 3rd edition rules introduced a sorcerer class which had inherent arcane power, but to Athas.orgs credit, did not allow the class in the rules as it was not a good fit in the Dark Sun setting.

For those that were looking for another rules option, Dragon Magazine 315 described a defiling rules system for 3rd edition. The rules had the then-common concepts of energy being drawn from plants (though defiling ash was described as being white), defiling as a choice (as well as a preserver becoming tainted and redeemed), being available only to wizards, and spells using defiling having increased power. The mechanism for choosing to defile came in the form of a point system where every time a spell effect (with certain effects only allowed for spells based on the caster level and level of the spell) was enhanced with defiling, the wizard would accumulate defiling points. The more points a wizard accumulated, the more penalties were applied to the character until the points were removed or the character eventually succumbed to defiling taint and a defiling score was applied. Succumbing to the taint removed the penalties from the points, but the defiling score could then be used by defiler-detecting spells to find defilers with certain defiling scores with ease.

The return of the Dark Sun setting in 4th edition gave us the most divergent defiling rules compared to previously editions. The major differences from past iterations were that both plant and animals were directly affected by the act of defiling and that all arcane casters could defile (not just wizards). The direct effect of defiling on animals actually caused allies to take damage, rather than all creatures in a defiling zone being slightly impeded with penalties. Like the rules found in the Athas.org 3rd edition rules, 4th edition allowed for the augmentation of defiling through the use of feats which could even go so far as to use defiling to damage enemies (reminiscent of the dragon magic in second edition). The overall result of defiling was that it allowed either a re-roll of the spells attack damage.

With each attempt at defining defiling rules, there is in interesting observation that can be made: There is a prevalence to codify increased penalties for defiling. The greatest example being found in 4e, where only allies take damage from a defiling player. This increased penalization of defilers could be seen as paralleling the overall neutering of DM providence that has often been cited in each new edition. In 2nd edition, a defiler had very little disadvantage except for the idea that everyone hated defilers. If a DM didnt account for that, the defiler class would have been far more desirable than a preserver. After a good old fashioned street brawl, a good DM would cause all manner of issues after half the city saw a player defiling. Much of 2nd edition had the DM making such things occur if warranted and in effect, 2nd edition had much less restriction. More modern editions seem to be enthralled with the concept of rules balancing so that the DM has very little say on how something should work. This may be attributed to D&D attempting to give all DMs a level playing field, so that even if you are a new DM you can run a game smoothly. Whatever the reason, continually trying to codify negative effects of defiling to prevent the act is rather silly. The fact is that if the players are a group of heroes, the act of defiling in the characters minds (which we call role-playing) should be a vile deed and possibly only allowable in the direst situations. If there happens to be an evil ring to the group, then the DM should have the world react accordingly: Elemental and primordial spirits being angered, towns people up in arms, the Veiled Alliance constantly hunting them, etc. Even the players character should have some misgivings of the act and might even seek a form of redemption.

We now to look towards D&D Next for the next attempt at defining how defiling works. The basics are well defined: Magical energy is drawn from plants and can be abused by defilers. The most simple rule would be that defiling causes a radius of ash based on the spell level and the spells power becomes enhanced (increased attack roll, maximum damage, maximum range, etc.) based on the vegetation available. And much like the Prism Pentad/3e Athas.org/4e, greater beings can tap into animal life to draw power (hopefully using obsidian as a component since I like the flavor it added to the Prism Pentad). Whatever mechanic comes into being to describe defiling, the key is to always ensure that it reflects what defiling is really all about: a grab for power, an injury to the world, and a truly despicable act.