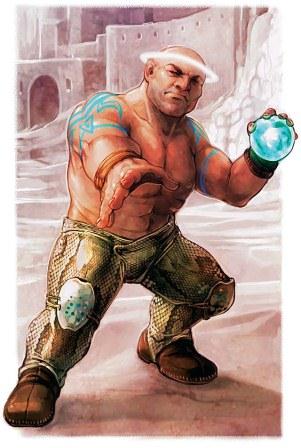 Trained in the way by both his parents as a young dwarf, Zxavier is a purist of mind and thought. Even though Athas is a horrific wasteland, Zxavier  knows no other way. It is the only world he knows and he enjoys the savage, primal fury of his world. Zxavier believes that only the learned use of the Way can  save anyone from extinction.

Zxavier is also loyal to dwarven culture and the dwarven people, believing that the dwarves of Athas can be united to form their own city-state not unlike the sorcerer-kings. He feels that the tendency of dwarves to settle in villages is what keeps them easy prey for the monsters. To this end, he has worked to relocate dwarves from around the Tablelands to Kled for a new life and a new dwarven nation. However, he has met with little success in this endeavor.

Years ago a near-death experience has changed life forever for Zxavier. Nearly 5 years into his wanderings, he and his comrades were a few days west of Altaruk when they encountered some wayward beasthead giants assaulting a caravan of Tyr. They were able to stop the giants but Zxavier lay mortally wounded from a giant's crushing blow. A druid came and offered the psionic dwarf a choice: He would heal the dwarf if he would put his talents to restoring Athas back to sound ecological health - closer to a greener age that was destroyed during the Cleansing Wars. His life was so precious to the dwarf that he agreed. A pact with the element of earth was forged and Zxavier became the newest cleric of earth on Athas. Zxavier became as zealous about the element of earth as he was about the Way.

Zxavier's mother vanished two years after he began his wanderings. Some dwarves ascribed her disappearance to some form of merging with the Way for she was a powerful psionicist. Zxavier did not wholly accept that and looks for his mother during this travels. In truth, Zxavier's mother has become a member of The Order who is now once again actively recruiting members after the devastating battle over the Psionatrix. If Zxavier were ever to hear of The Order or that his mother was still alive and associating with The Order, he would immediately set out in search of her to pursuade her to return to Kled by his father's side where she belongs

Taken to wandering alone lately, Zxavier is getting a reputation as a bearer of news to all the villages of the Tablelands that he visits. He preaches openly about the importance of preserving and healing the earth. He is known as an adamant enemy of the para-elements of silt and magma. Zxavier used the money he earned during his adventures to open a psionic school for dwarves in Kled. During his wanderings, Zxavier actively recruits dwarves from all over the Tablelands. Recently he has thought of heading north of the Tablelands to check out a strong rumor of a mysterious dwarven village known as Kel's Lot. Since this is will be a journey into utterly, unknown territory, Zxavier will most likely hire bodyguards to accompany him on the trip.

Possessions: Simple cloth tunic, sandals, a psionic receptacle (a gem) that contains 50 PSPs that regenerate with 24 hours if used.

Personality Traits: Aggressive, Assertive, Noble but not compassionate or merciful

Combat: In combat, Zxavier will try use animal affinity to assume a quasi-kirre form. Then activating kinetic control, he will wade into battle dishing out damage while taking none from physical blows. Then he will discharge the energy gained during kinetic control into the toughest opponent.