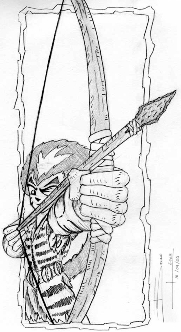 As told one evening to a group of halfling children around a dying campfire under the light of the Athasian stars.

"Gather around my little hunters, and I will tell you about the other races in the world, most of whom you will never see. Actually, I take that back... Basha, you are the oldest here. Do you remember the night five high suns ago that our great chief returned from his journey across the mountains with an offering of ten fat humans for our tribe? You would have been young, but perhaps you remember the great feast that night. Well, It is no matter. In order to hunt the tall ones, it is best that you understand them, as I have come to understand them. When the five clans gather at the village pyramid every quarter year, there is much story weaving. And I have listened to the stories about the tall ones most closely, as we all should. Some of the tales speak of such amazing and outlandish things that they are easily disbelieved. But I have culled what I believe out of these stories enough to form facts from them.

What? What did you say, Basha? Do I trust the tall ones? No. They are all lowly creatures who fight amongst themselves for no reason. They wage wars against others of their own raceand remarkably do not live peacefully within their own cities and among their own kind. It is the natural way that one halfling does not fight another. Also, you know as well as I do that one halfling will always help another. You feel this in your heart as strongly as any other halfling, and you are all children. Humans, dwarves and elves and the like, fight against this natural way. The very fact that one human will kill another for petty differences as easily as I might kill an offending fly proves this.

But however stupid and untrustworthy they are, these races have many things that they can offer the us, if we are willing to learn from them. First, I will speak of a race you will not likely see within the borders of the forest. Nor will you be likely to understand this creature as anything but a monstrous insect. They are called Mantis Warriors, known among themselves as thri-kreen. They are very large, standing as tall as two halflings placed one on the shoulder of the other. They have four arms with fierce claws. Their bite is poisonous and they move with a speed like the wind through the trees. Still, these actually intelligent creatures have many things in common with Halflings. They honor the hunt first in their lives more than any other thing, even above their own racial unity. They eat meat and meat only, just like halflings; even though they do not use fire to cook it and can be particular in their tastes. For instance, I hear that thri-kreen ONLY eat elves for some reason. Despite their disfigured appearance and strange mannerisms, they share a wisdom among their race and worship the earth in a similar fashion to Halflings. Dwarves, a sturdy race of stubborn single-minded individuals, have much to offer as well. They are hard workers. They attach themselves to one taskand one task onlyfor a long period of time. They are similar in height to halflings, but will never be confused as such, for their sheer girth and strength make them as wide as the widest trees. Though slow, they have so much in the way of persistance that they cannot be easily defeated."