Dragon Kings is a new fantasy game world conceived and presented in fiction, art, and music simultaneously by Timothy Brown, creator of Dark Sun and 2300AD.

What's your vision of the Dragon Kings Project? 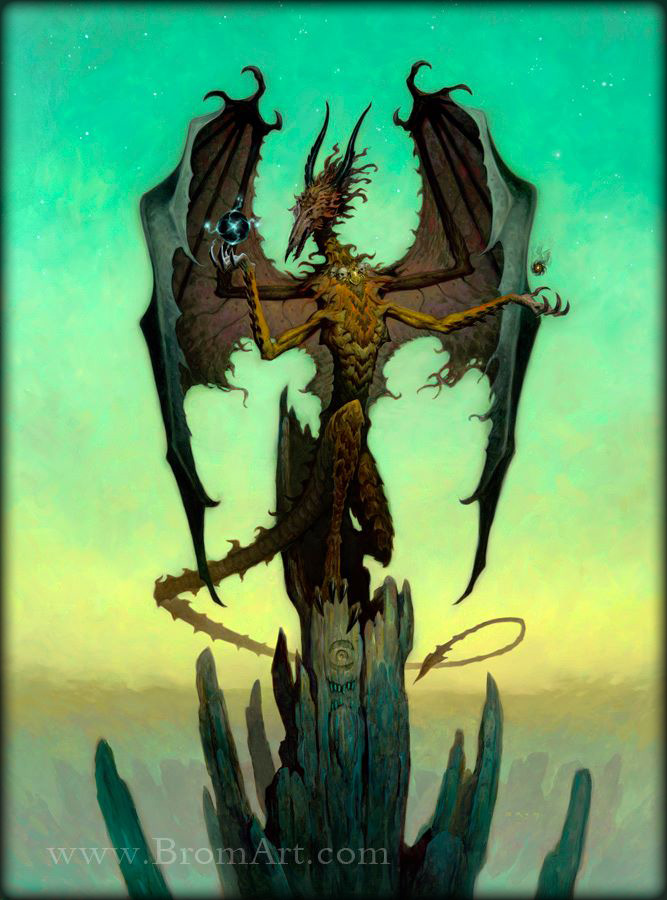 As a project, rather than as a fictional universe, my vision is to spread the creativity over three media rather than just the traditional two: adding music to both fiction and art. Im convinced that music can create as vivid an image of a fictional world in ones mind as any artwork or prose. By way of example, I have a complete image in my head of Rushs 2112 fictional setting without benefit of a single piece of artwork. Songs can be informative and emotionally powerful. Ive played in a lot of role-playing games that needed an emotional boost. Thats what Im striving for, that sort of genuine, visceral impact of a good, hard driving song. The fun for me is coordinating all three media to deliver the best new world I can imagine.

How did this concept come about?

Ive been a professional writer. Ive been a professional musician. The two had to collide at some point. Like me, Ive found many other role-players also enjoy the same kinds of progressive rock concept albums that I do. Theres a connection there that I think has something to do with unique story telling. Thats what both do, after all: tell stories in a non-traditional way. Ive felt that kindred spirit for decades, and always wanted to combine them into a single project. Hence, Dragon Kings.

Tell us something interesting about Khitus.

Khitus is a world at the mercy of plunderers. Everything of value  gems, jewels, tools, weapons  even life-giving materials like crops, air, and water, is being stolen. By who and for what purpose is not immediately clear. My mental image is of a globe where one hemisphere is bleached sandy white and lifeless, gradually greener and bluer on the far side where theres still something left to steal, and in the middle of that greener hemisphere stands a mammoth fortress, like some enormous tick sucking the planet dry. Fighting against those plunderers and their henchmen, learning who and what they are, is the primary focus for early adventures on Khitus.

How is Dragon Kings the spiritual successor to Dark Sun?

In hindsight, I wish I had stayed more involved with Dark Sun for a longer period of time after its conception. I had in mind several exciting revelations, whole new vistas of adventure and exploration that never got into the game. What Dark Sun eventually became was good, but its not where I would have taken it. By making Dragon Kings its spiritual successor, I can revive many of those concepts and expand upon them in a thematically similar universe. If anything, the situation in Dragon Kings is even more desperate, more dangerous, and the enemies to be faced and defeated more sinister.

What aspects/themes of Dragon Kings will Dark Sun fans recognize?

At least to begin with, Dragon Kings takes place in a onec-lush region of Khitus, now rendered an arid wasteland. The various player races are exotic, not standard fantasy fare. Inhuman races such as insects and lizards hold sway over vast areas. Bereft of better materials, many fashion weapons and tools from bone and chitin. An adventurers fortunes may rise and fall quickly, and the considerations of simple survival often rule the day.

What are some of the major differences of Dragon Kings and Dark Sun?

Magic is rare but powerful, and while there are consequences of its use they are entirely different in Dragon Kings. Prionics are an ancient truth to be rediscovered. The allegiances to race and clan run deeper than mere flesh and bone, to the very sources of magic. Religions abound. If Dark Sun conveyed a message of squandered resources, the Dragon Kings theme is the consequences of complacency.

What kind of technology level does Khitus have?

Magic is rare enough that its had minimal effect on day-to-day technology. There is writing and language, agriculture and architecture, simple tools and weapons equivalent to classical ancient cultures. Artisans can work iron and steel (where there is any left), cut stones, raise buildings and irrigate fields (where the rivers have not been diverted away). Muscle and animal power reign supreme, enhanced by ramps, wheels, and block and tackle. Far more sword than sorcery.

Is there magic on Khitus? Tell us about it.

Magic is traditionally a state-controlled commodity. Only a king or senate could bear the expense of maintaining a magical college. Rogues and wanderers dabble, but true mastery requires time, study, and access to ancient texts that are closely guarded. As such, magic is employed to do the really heavy lifting of state policy. Additionally, the personal consequences of sorcery are so terrible  well, more on that as the world develops.

Psionics are a big part of Dark Sun, are there psionics in Dragon Kings?

The short answer is yes. This is a point in Khitus history when ancient psionic arts are being rediscovered.

Athas doesnt have gods, what roles do gods/religions play on Khitus?

Khitus golden age was watched over by the powerful Dragon Kings, demonstrably real beings who ruled with god-like authority. In their absence, all manner of religions have sprung up, their followers worshiping gods, charismatic leaders, powerful men and creatures, and so on. Competing philosophies vie for followers. Cults demand single-minded subservience.

Honestly, I want to spend my energies creating a world and its stories rather than a whole new role-playing game system. Im story motivated, and there are plenty of really great game systems already out there.

I also dont want to limit anyone who wants to play Dragon Kings. Ideally, we will create a single rules-agnostic world book and provide supplemental PDF rules appendices for every popular game system.

What RPGs are you currently playing?

Within the last three months Ive wound up two different Pathfinder games where I was a player. Ive been developing my own Traveller campaign to run online with friends. Also, Im engaged in a play-by-Skype Vikings game, using Mythic Iceland and Chaosiums Basic Role Playing, which Im enjoying a lot!

Tell us about the Music and its relationship to the setting.

Im going for a classic progressive rock feel. I think that style lends itself best to dramatic storytelling. A hallmark of progressive rock is its elevated lyrical content. Its a comfortable fit. Every time I sit down to match lyrics to musical notions they fit together better than I dared hope. Ive got the entire musical story arc planned out for one hero, following him from obscurity across the face of Khitus. That story is itself a gazetteer of a kind; the lyrics impart a good amount of the content, describe places, characters, and struggles. But more than just that, it conveys the mood and feel in a unique new way that I think is really exciting. Ive got several songs scratch tracked now and will finish up some presentable pieces to share on our website soon.

Is Lotus Warriors the name of the band? If not, is there a band name?

That remains to be seen, actually. Some of the musicians Ive been working with like that name, and some think we should call the band the Dragon Kings. We may leave it up to the fans to help us decide.

Tell us about your vision for the art aspect of Dragon Kings.

We nailed the art on Dark Sun, no question. So, Ive had to ask myself, how do we keep all of those strengths and yet give Dragon Kings an artistic character all its own? Part of that is conceptual: Khitus storied, richer days are not so long ago. Its part of living memory, and its artifacts are still all around, albeit greatly diminished. Not every aspect of the good old days is buried in deep sand. The imagery reflects this difference and gives us a point of independence. Also, I want to concentrate on action. Whenever possible, I want motion and panoramic depth. When someone looks at an illustration of a Dragon Kings monster or character, I want them to think now thats something I would like to play!

Brom and Baxa are the first two collaborators you have announced. What drew you back to these two great Dark Sun artists?

I can write and I can make the music, but illustration is beyond me. Both Brom and Tom are well aware of my artistic limitations. Theyre both well versed in my Ive written something, so you draw it, now draw something and Ill write it up art direction style. So many aspects of the Dragon Kings project are unexplored territory, so to speak. Brom and Tom are dependable anchors.

What role will Brom play?

Broms completed one cover painting for Dragon Kings already. Were hoping to have him do a second cover painting, but that depends upon how the project rolls out, everyones schedules, and so on. Hes open to whatever level of participation the project warrants, so that will play out over time.

What are you publishing plans for Dragon Kings? Are you self-publishing or are you working with a publisher? Which one?

This will be strictly self-published. I really want the creative process to breathe. If one aspect is getting ahead of another, I want the flexibility to refocus our efforts. If somethings just not working I want the option to toss it out and start fresh. I cant imagine a publisher would be too keen on that, so Ill forge ahead without one.

Is this going to be a kickstarter or are you funding this in some other way?

We will almost certainly crowd source this project at some point. Im hoping to build a high level of participation with the fans as we create Dragon Kings. I want everyone to enjoy the process as much as I do, so were going to put up as many sketches and snippets of text and even bits of scratch tracks and final songs as they become available. Once were at a point where the project is well in hand, then a crowd sourcing effort makes sense, not only to fund it, but as another means of active participation in its outcome.

Do you have any estimate of a timeline for release?

Yes, just after the first of the year 2014. That gives us time to write, paint, and record it all, get it manufactured and into peoples hands.

Are there ideas for future products or is this a one-off?

There are always more stories to tell

You can find out more about the Dragon Kings Project online at the following locations: