A dwarf, following his Focus. 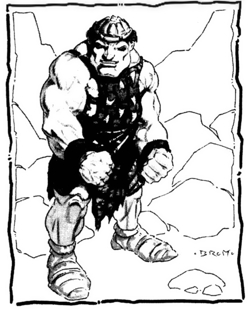 </p>Thessik Stonebrow sat outside the Captains chambers. He fidgeted slightly, twiddling his short fat thumbs, running his hand over his smooth, broad, bald head. The eager dwarf had been waiting for nearly a quarter hour and was getting anxious. His mind raced with the possibilities of what he might find in the caves, if he got to go. His greatest dream was to find out that the caves connected to the lost dwarven city that his grandfather had told him about decades ago, and that he had been searching for for many years. He pictured himself exploring the lost dwarven city, finding dwarven artifacts, history and wealth. Thessik imagined clearing out the ancient city of undesirables and refuse. Once the city was cleared dwarves from hundreds of miles around would come to the city and live there, as one people, perhaps they would start their own city-state, a purely dwarven city-state to rival Tyr.</p>

Thessik was snapped out his reverie as the door to the captains quarters opened. Eriwen, a human miner walked out. "The capn wants you.", Eriwen said. Thessik smiled, rose off the bench he had been seated on, and nodded to Eriwen. The broad shouldered dwarf quickly walked into the Captains quarters.

"Come in Thessik, sit down.", the captain nonchalantly commanded. Thessik sat in a worn wooden chair. The Captain, Captain Wilok stood next to a window staring out into the afternoon sky. "I assume youre here to inquire about the volunteer mission to the caves."

"Yes sir. Im here to offer my services for the protection of village of Chelin to clear out those caves.", Thessik half-lied. While Thessik liked some of the people in Chelin he was only there because it was in the same area that his grandfather believed the ancient dwarven ruins were. To humans Thessiks attitude toward the village may seem unfeeling, but his Focus dictated that he use any means at his disposal in completing his Focus, which was finding the lost dwarven city. As his Focus, finding the dwarven ruins guided every aspect of Thessiks life and per dwarven custom Thessik was not permitted to speak of his Focus to non-dwarves.

The Captain nodded in approval. "Im sure this has nothing to do with your recent forays into the wastes with a few of the other dwarves. Does it?," the captain chided, not expecting an answer. The captain had dealt with dwarves on a regular basis and knew better than to question them about their focus. While he didnt know the specifics of Thessiks focus he figured this mission was a step in the right direction in helping the dwarf complete it. In addition anything standing in the way a dwarfs focus was in dire jeopardy of losing its life. The dwarven engineers knowledge of stonework and mining would probably help the party once undergound.

"Youre in.", the captain decided.

Inwardly Thessik rejoiced. Outwardly the dwarfs face was calm and a slight smile cracked the hard surface. "Thank you sir", Thessik replied politely. Of course he knew he was going to be picked, he was a dwarf after all.

"Its unknown how long youll be gone, Ill inform the Master Engineer of your departure. Return in two days time to meet the rest of the exploration party."

Over the next two days Thessik oiled his leather armor, honed his bone short swords to a razors edge and lovingly cleaned and prepared the tools of his trade (metal engineering tools and psionically hardened bone lock picks). When he wasnt actively preparing for the trip he was out trying to get other dwarves to volunteer.

The night before he was to meet with the exploring party Thessiks dreams were very lucid. In fact they werent really dreams at all. He was seemingly remembering his life and the events that drove him to his current Focus. In his dreams he saw himself first as a youth in the city-state of Tyr. Thessik was raised by his father Jerib and mother Perin with wealth that rivaled that of nobles.

His father was the head engineer for the iron mines of Tyr. He was paid well and his family lived well. His mother worked at home, raising her five children, of which Thessik was the fifth. His eldest brother Henrik was an accomplished stonemason who had been busy since the Great Earthquake several months ago. Kiln, second born, was also a stonemason and was in business with his older brother. Ayda was Thessiks older sister, third eldest, and married to a militiaman for the City of Tyr. Colin was the next inline and was a granite quarry foreman. Thessik, fifth, was a promising mason and engineer like his sire. The next youngest, Thera, mysteriously disappeared ten years ago. The youngest Olden had recently left the family home to learn the life of a Tyrian Templar.

Thessiks grandfather Wylug also lived with them. Wylug was a scout for Tyr. He searched the mountains far and wide for new veins of iron and other precious metals for many years in the service of Kalak. On one of his last official missions the aging dwarf found part of an ages old finely crafted stone building jutting out of the sand. Knowing legends of the old dwarves, Wylug wanted to search the area for an entrance, but his party was short on water and food. So he mentally marked the spot and returned to Tyr. Later he attempted to return to the spot, but could not find the ruins. Soon after he retired and began looking for the ruins full time. After years of searching he could never find the ruins.