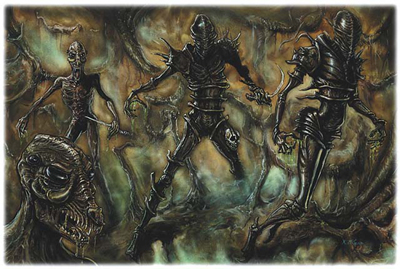 " The current state of the Athasian tablelands is a result of an apocalypse not thousands of years in the making, but of one monumental arcane apocalypse that happened less than a thousand years ago.  Not that the tablelands were some verdant slice of paradise before, but the twisted wastelands and mutant mongrels you know as home are not how it's always been.

The great and mighty sorcerer kings and kings, may the true gods damn them, have constructed their lies to beguile the minds of weak men for the sake of control and protection.    This is not to say that the rulers of the seven city-states do not have the tablelands in their thoughts, they do, they have saved us from an unimaginable fate.  How do I know this?

Have you ever meet someone that has been beyond the Ringing Mountains?  Ever meet someone that's traveled across the Sea of Silt?  How about past the Deadlands?  To the north?  Perhaps you've heard tale of Kurn and Eldaarich, but do you know anyone who's ever been there?  Well I have, I've been beyond the periphery, been to lands beyond the control of the exultant sorcerer-kings and I could barely get back here fast enough.

The watchful eyes of our bloody saviors see that which our minds could not comprehend.  And the Dragon?  He is the greatest of them all, we owe him everything.  You've heard tales of the Dragon's levy, of thousands of slaves being sacrificed to this great beast?  Ever seen it?  No, I thought not.  But we have all seen slaves being taken out to the desert by templar and army units, and they never come back either.   Ever seen those slavesmost are fit to be gladiators, but they are sent out to be "sacrificed".  And we've all heard tale of the Dragon wiping out huge patrols of the kings and queens men in the wrong place at the wrong time, to his terrible fits of rage have we not?  These are not sacrifices, not accidents, these are conscriptions.  Conscriptions into the Dragon's army.

What does the Dragon's army fight?  They fight that which is beyond the periphery, just beyond the domains of the sorcerer-monarchs.  They are trained and fortified to fight that which mortals mens' minds are not meant to ever witness.  They die on a daily basis so that we may live.

Why don't they just tell us so we can fight?  They tried that once.  The armies of men, and elves, and orcs and every other native being to this planets foughtand nearly died.  As I said, the sorcerer monarchs are our blood saviors.  Together they prepared a vast ritual to take place in the complex of the Pristine Tower, together they purposely drained and warped the life for a thousand miles in every direction.  Those that were not inside the protective sanctums of the sorcerer kings, their most favored templars and generals, most knowledgeable nobles and merchant-lords were subject to the effect of this ritual.  Some of the sorcerer monarchs would not participate in the apocalypse and so were not ready for it, the ruins of Kalidnay, Yaramuke, and Giustenal  bear silent witness.   To plants, it devastated them, wilting them, mutating them.  To beings and animals it drained their  essences making many dimwitted and permanently dazed and warping their very beings into braxats, anakores, and the like.

Doing this served several purposes, one, it created the Periphery.  The things that live beyond it must take great will to enter the Periphery, and when they do the Dragon's army is there to stop them from coming closer.  Secondly the things beyond the Periphery need the essence of plant life and our life like we need water and as you knowthere is not much life here nowso they do not have much incentive to come here.

Thirdly it changed the way magic works.  When defilers cast their spells they drain the land and some life essences of the people around them, thus protecting us from that which is beyond the Periphery.  So you see the Veiled Alliance has it wrong, casting magic and preserving the life force around us will only make it easier for Them to reach us in the long run.  I have heard tell of a league of arcane warriors who call themselves the Knights of Borys, they actually push out beyond the Periphery and use defiling magic to wreak havoc on our great foe! Amazing, I know.

What of our current situation?  Well the fools in Tyr may have killed us all.  For the sorcerer monarchs use much of their arcane might in maintaining the Periphery.  Without the King of Tyr each of the other sorcerer monarch will have to devote that much more energy to the task.  And Kalak, he was a god among kings, his ziggurat was going to enable him to search out across Athas to find other pockets of civilization beyond the Periphery, but that hope is gone now.

How do I know all this?  There are ruins in the periphery where the reach of the Dragon's men are not absolute.  There places where knowledge has not been completely eradicated by the minions of the monarchs  and I have spoken to spirits of times long past."

After the vision Hammanu clutched his clawed fingers, enclosing the psi-crystal within his huge paw.

"What of the man this memory came from?" Hammanu asked eagerly.

Aerix, the wandering templar-spy proudly stated, "He no longer lives my liege."

"No one my lord.  This nomad felt the sting of my bard's friend not long after he finished his tale."

Hammanu resolved himself, Aerix was a loyal servant, but he was away from Urik too much and this kind of truth could not be afforded to be let out.  He gave a sharp look to Aerix, sharper than any blade.  Blood dribbled out of the templar's nose and he collapsed.

Borys would hear of thisperhaps a levy of a thousand slaves was not enough to keep up tight patrols of the Periphery if this nomad was able to get to it and return.