This place resonates with echoes of long forgotten wars. While the names of those forgotten may never be uttered again, their deeds live on in glimpses of psychic memories.

Al’ugarri stumbled over the ridge and into the next canyon only moments before his pursuers. The elf had made a bad decision in attacking the caravan. Most of the warriors of his small tribe were dead now and it looked like he was soon to follow. Even with his leg injured he was still faster than the humans, but with blood flowing from his wound, he couldn’t keep up the speed forever so he needed to lose them in the canyon.

The elven war party leader, now just a lone elf, continued tracing his way along the canyon floor, looking for a place to hide. The canyon broke in two, both arms looked the same. He followed the one that had a bush in it, hoping there was some water somewhere near to slake his thirst. It was a bad decision, within moments he reached a dead end. Turning around he saw his two pursuers round a bend.

Al’ugarri was determined to give these kank-riders a fight if he had to. They moved forward and flanked him as he stepped back against the wall of the canyon. His foot glanced something and he spared a look down. The rusted hilt of a metal dagger protruded from the sand. He kicked it to dislodge it from the sand hoping to see a metal blade, but it was just the hilt and crosspiece.

His pursuers closed in on him. A large Gulgan slave swung a heavy Agafari club at the elf’s head just as the Urikite caravan guard dashed in with an obsidian blade. Al’ugarri’s wounded leg hindered him and he couldn’t react quick enough. He saw the Agafari club arcing toward his head.

In the same moment, the elf is transported to another place. No – not another place, another time. He saw the same canyon walls turn green and lush. As if from a kes’rekels view, he witnesses a similar battle occur, with an elf fighting two humans. The large human swings a club and the elf dives forward, taking only a glancing blow.

Al’ugarri snaps back into his body and he reacts without thinking, diving forward between his two attackers. The thick wooden club glances off his back as he rolls between his attackers. The elf feels somehow energized as he punches out with his own bone dagger toward the Urikite guard’s exposed knee.

Just before his blow lands, he again is transported to the past and watches this other elf slash out against his opponent’s knee. Al’ugarri sees the angle of the blade as it cuts deep, a crippling blow.

Back in his own mind Al’ugarri changes the angle of his own blade to match what he had just seen and strikes at the guard’s knee. The guard screams and clutches his maimed leg, falling to the ground in agony.

The elven raider is sure he can outrun the lumbering Gulgan so he takes a step back and runs. The Gulgan slave looks to his companion as he sees the backside of the elf round the bend of the canyon. 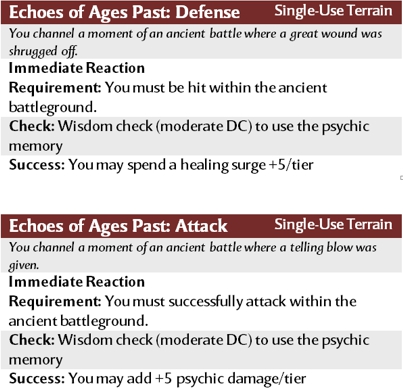 This place resonates with echoes of long forgotten wars.  While the names of those forgotten may never be uttered again, their deeds live on in glimpses of psychic memories.

Effect: When the living spill blood on this ancient battleground the past reaches out to help them.

Usage:Wars have been fought all across Athas. Any piece of ground could be an ancient battlefield where the psychic impressions of warriors who struggled and died, or emerged victorious, still linger.